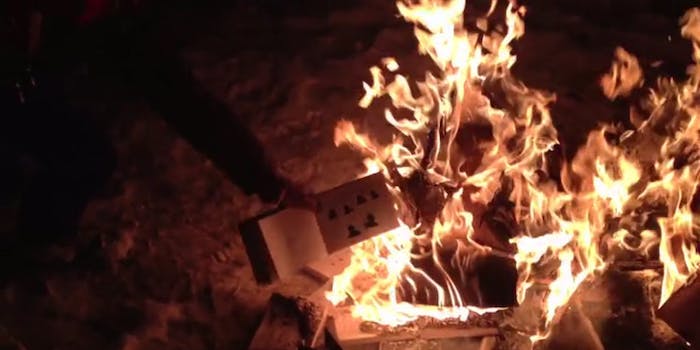 Kickstarter webcomic goes down in flames—literally

Will James Campbell be able to survive his own reasons for backing out of his Kickstarter campaign?

After a tremendously successful Kickstarter, a webcomic is reportedly burning copies of the comic books backers bought but never received.

John Campbell is the creator of the now-offline webcomic Pictures for Sad Children. Once lauded for its edgy and absurdist humor, the comic featured guest stars like Kate Beaton. Though Campbell has since-removed personal works of art, a few Tumblr reblogs of older images remain, along with a glimpse of the comic’s iconic style and humorously despairing look at the problems of creating art against modern existential crises. These are problems that, as fans discovered this week, strike Campbell in a very personal way.

After self-publishing a print version of the comic in 2009, Campbell took to Kickstarter three years later to fund a second volume. With a goal of $8,000, the Kickstarter was a major success, earning $52,000 from over a thousand backers. But a few months after it was funded, things got weird. First, Campbell posted an update claiming to have piggy-backed on the artistic struggles of people with real depression.

Then a few days after this, Campbell posted again to explain that the original claim of faking was a satirical look at society’s reaction to mental illness. Campbell seemed to blame anyone who believed the original confession of fakery, declaring that anyone who had a negative reaction to the stunt felt that way because they “enjoy feeling negatively.”

“I wonder if the person who backed at the thousand-dollar level enjoys feeling negatively,” backer Jonathan McGaha responded. Another backer, Raven Morier, noted that “none of the rewards explicitly mention physical or individual copies. Hmm.” These responses referenced the fact that not everyone had gotten their backer rewards, which were originally promised to have been delivered in July 2012, two months after the Kickstarter ended. While the new updates raised some eyebrows, most backers continued to support Campbell.

But despite the backlash, about a quarter of the backers reportedly never received their rewards, and this week, almost two years since the campaign launched, Campbell posted a vicious new update entitled “It’s Over.” In it, Campbell attacks fans, supporters, the art world, hipsters, capitalism, and possibly himself. There’s also a video of Campbell tossing the books onto a bonfire.

I shipped about 75% of kickstarter rewards to backers. I will not be shipping any more. I will not be issuing any refunds. For every message I receive about this book through e-mail, social media or any other means, I will burn another book. …

If you would like a refund, please contact a fan of my work directly for your money. This is where the money would come from anyway. I am cutting out the middle man. …

I’m through “making fun of” consumerism and other profoundly negative aspects of modern living while participating in and supporting those aspects of living.

After lashing out at the backers who’d complained (especially at the $75 level), Campbell is looking for people who would directly fund personal living expenses without seeking a “return” on their “investment.” Campbell does not specify exactly how this would provoke the desired social change, since presumably the people supporting him would be meeting their own needs in the usual way, through earning incomes and paying expenses.

If Campbell is telling the truth about the number of fulfilled rewards, this isn’t a typical case of taking the money and running: Campbell seems to have simply lost the motivation to continue filling the rewards. Yet there’s been no mention of what Campbell did with the $50,000 raised on Kickstarter. Instead, Campbell claims to have stopped paying rent and bills and to have only $700 left in the bank.

On Kickstarter, many of the campaign’s unrewarded backers seemed hurt and confused, less by not getting the reward they paid for than by the aggressive tone of Campbell’s post. “I just wanted physical copies of something that helped me see the humor in the darkest moments of my life,” C Andrews wrote.

“I wanted a physical reminder to search for the moments of mirth hidden within the deepest of depressions. And I chose to back at a much higher rank than one that would just get me the physical items I wanted to purchase, as I just wanted to… thank you somehow for helping me laugh through those bad times.

“[I]s this really the sort of thing you’re protesting? Would you call my behavior part of the problem?

“I’m really struggling to understand here how you feel that deliberately breaking promises you’ve made is somehow taking a grand stand for something positive.”

Campbell’s motivation for refusing to honor the Kickstarter campaign ostensibly stems from recent conflicts the artist’s had over the necessity of participation in a capitalist system. But it also involves an issue that doesn’t arise during Campbell’s long rant to Kickstarter backers: frustrations with the artistic community in which Campbell’s been participating. Numerous members of the webcomic community have noted that Campbell has spent the last two months systematically removing most of his personal work from the Web, all while lashing out at contemporaries. Recently Campbell blamed the departure on another white male artist, Joel Watson, whom Campbell satirically labels a “black woman.“ Campbell criticizes Watson for not doing more to combat the issues that women face when they start their careers in the comics industry.

Over the same period, in a series of now-deleted tweets, Campbell has repeated the mantra, “We can’t do what we’ve tried before,” along with posting a deep Tumblr analysis of the rhetoric used to label “mentally ill” political activists who immolate themselves as part of protests. Campbell followed this up today with more footage of the Kickstarter books burning to ash, as if to suggest that the real reason for refusing to “refund” backers was not actually paper and ink but a deeply conflicted sense of artistic identity.

On Twitter Friday, Campbell tweeted a video of legendary manga artist Osamu Tezuka stating, “you have to be stupid to [work in comics].”

Campbell is clearly tired. But so are the artist’s supporters. Reactions from fans and detractors have ranged from confusion to anger to concern across multiple platforms.

“This just seems like one of those shakespearean moments where a person’s motives are sympathetic or understandable, but their ensuing actions totally aren’t,” wrote David Steiber on Metafilter’s discussion of Campbell.

It’s possible that this update is yet another social experiment. But with the majority of Campbell’s creative works being removed from the Internet, it seems less and less likely. “I read Herman Melville’s “Bartleby the Scrivener” several dozen times in high school, please blame Herman Melville,” Campbell writes in a Kickstarter post—a disturbing reference to a character who simply stopped living and eventually existing altogether. “I am interested to see how my life progresses in the next few months,” Campbell adds.

Campbell has already accomplished one thing from the latest phase of the Kickstarter: Campbell’s made a relatively simple item, a backer reward, into a much more serious conversation piece about free exchange culture and the worth and value of human dignity in the face of easy incentives to action, as well as question about whether art is worth creating under consumerist conditions.

But the ultimate question is how much it may have cost Campbell to ignite that conversation, and whether the community can support him before he pays a far higher price than any of the Kickstarter backers.