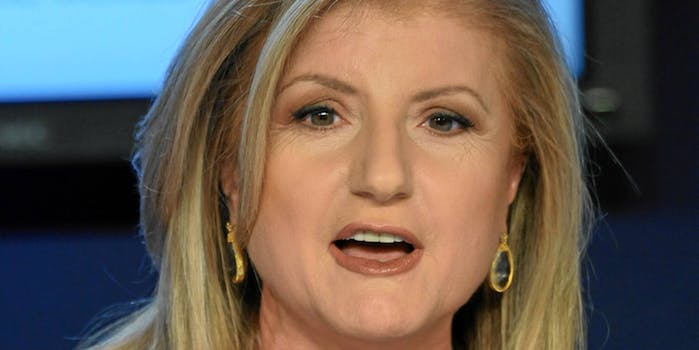 When U.K. author and columnist James Bloodworth sent out a press release for his new book, The Myth of Meritocracy: Why Working-Class Kids Still Get Working Class Jobs, he was happy to hear back from the Huffington Post, whose editors asked him to write something for the site.

“I blogged a couple of times for the Huff Post a few years back when I was just starting out writing,” Bloodworth told the Daily Dot in an email. “I wasn’t paid then, but I assumed that, as this was something they had requested in relation to my book, that they would pay me for the piece.”

That’s because Bloodworth’s book is about the burdens of unpaid labor.

But when Bloodworth’s publicist followed up with the Huffington Post about pay, they were told there would be none. Bloodworth then took to Twitter to air his frustration, and within 24 hours, his tweets went viral.

Bloodworth was surprised by the response, noting, “As a writer, you often stay quiet about these things—you don’t want to rock the boat and potentially jeopardize work opportunities in the future. But there comes a point when you have to say: Enough is enough. I suspect it struck a nerve with lots of people in the creative industries because we feel a bit beleaguered by a culture which seems to feel a sense of entitlement to the things we produce.”

The Huffington Post is notorious for not paying writers, offering instead “exposure” or a platform. In an interview in February, the U.K. editor for the site, Stephen Hull, said, he was proud the site didn’t pay. “When somebody writes something for us, we know it’s real,” he said. “We know they want to write it. It’s not been forced or paid for. I think that’s something to be proud of.”

In response to the controversy over his remarks, the Huffington Post replied that their bloggers were happy with the arrangement. However, an investigation by the International Business Times found that every Huff Post blogger they talked to wished they were paid.

And if social media response is any indication, writers, for the Huff Post and otherwise, are not willing to sacrifice money for “platform.”

Laura Miller, books and culture columnist for Slate, posted a screengrab of Bloodworth’s tweets, and the responses were livid.

@magiciansbook this drives me mad, people and institutions think it's acceptable, it's not!

And in October, actor and writer Wil Wheaton’s own set of complaints about the Huffington Post went viral.

HuffPost: We’d like to publish a story you wrote!
Me: Cool! What do you pay?
HP: Oh, we can’t afford to pay, but EXPOSURE!
Me: How about no.

Wheaton argued later in a blog post, “Huffington Post is valued at well over 50 million dollars, and the company can absolutely afford to pay contributors. The fact that it doesn’t, and can get away with it, is distressing to me.”

“The quality of publications which pay writers is also inarguably higher, which, in turn, generates more readers,” Bloodworth said. “I think this [nonpaying] trend is likely to increase as more journalists say ‘no’ to writing for free. I’ve started to notice this in the U.K. already—the quality of those publications that don’t pay seems to be getting worse, and more young journalists realize that working for free is a bit of a con.”

He also added this advice: “Twitter helps. The ‘platform’ offered by publications such as the Huffington Post is no longer essential when you can essentially cultivate your own following on Twitter and other social media.”