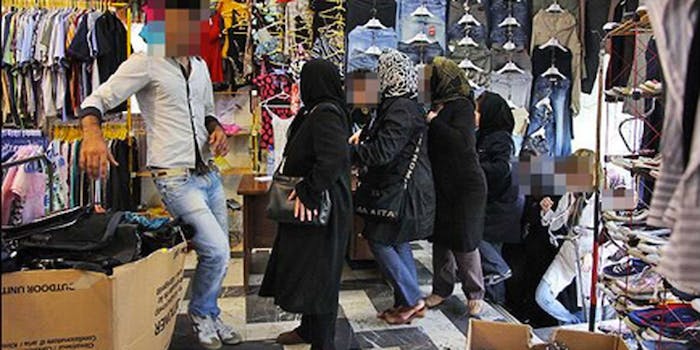 Iranian women may be required to keep their heads covered and wear loose-fitting clothes in public, but they certainly are allowed to wear jeans. And they want Israeli Prime Minister Benjamin Netanyahu to know that.

After giving an interview to the BBC in which he asserted Iranians were not afforded the freedom to wear jeans under the hardline Islamic regime that rules that country, Netanyahu has been inundated with messages on social media from Iranians proving the contrary.

When @netanyahu doesn’t know about what Iranians wear, how does he dare to talk about Iran’s Nuclear Program? #IranJeans

The Israeli leader made the comment during an interview with the BBC’s Persian television arm, pushing back against a positive diplomatic and media blitz from newly-elected, moderate Iranian President Hassan Rouhani. Since replacing the hardline Mahmoud Ahmadinejad in August, Rouhani has made several significant strides to improve Iran’s relations with the West, including direct communications with President Barack Obama. It was the first time an Iranian and U.S. leader had spoken since the Iran hostage crisis in 1979. Rouhani also publicly acknowledged that the Holocaust took place, which makes him a progressive on the issue compared to his predecessor.

The easing of tensions between Iran and the West has given Netanyahu a reason to try and paint Rouhani as a wolf in sheep’s clothing. Israel and Iran have long had an antagonistic relationship, and the Israeli prime minister has a vested interest in making sure the international community maintains sanctions against Iran’s nuclear program.

But the desire to paint Iran as an oppressive, totalitarian regime caused Netanyahu to make some unfounded assertions about how Iranians live their everyday lives.

“I think if the Iranian people had freedom, they would wear jeans, listen to Western music and have free elections,” Netanyahu said, according to Reuters.

Though it was just one line in a lengthy interview, much like “binders full of women” in the last U.S. presidential election, it’s the line that took hold with the public. Shortly after the interview aired, Iranians were taking to social media to correct Netanyahu with photographic evidence proving that they do in fact wear denim pants.

When @netanyahu doesn’t know about what Iranians wear, how does he dare to talk about Iran’s Nuclear Program? #IranJeans

Though it’s easy to mock the Israeli leader for this gaffe, he was likely drawing on the fact that Iran does have a strict dress code. Women for instance must keep their heads covered and wear loose fitting clothing while in public. And according to the New York Times, there was a period shortly after the Islamist Revolution in 1979 where jeans were seen as “a despicable symbol of the United States.” Now, however, they are as ubiquitous in Iran as they are in virtually every other part of the world.

But that’s not to say the presence of jeans means a completely free and open society. After all, those Tweeting out #IranJeans in Iran have to do so by using special software to circumvent the government’s Twitter block. And there have been numerous instances, under the previous presidential administration, where the Iranian government has interfered with internet access in order to possibly influence elections.

This led some to ironically reappropriate the #IranJeans hashtag to show an uglier side of the theocratic government. These social media users began posting pictures of Iranians who were allegedly killed for opposing government practices while wearing jeans.

Majid waving at the crowd standing tall while getting hanged on his #IranJeans! @NYtimes @CNNi @latimes @WSJ #Iran pic.twitter.com/vBoEhOhr0B