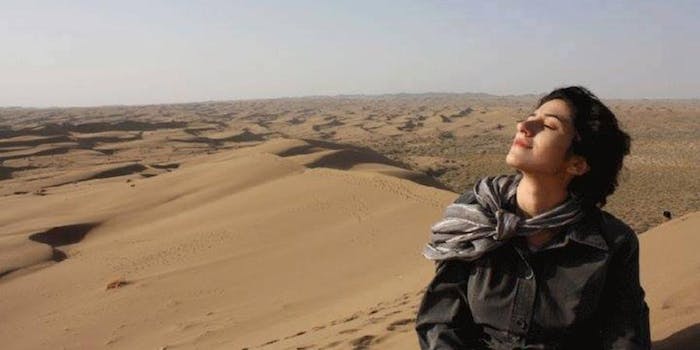 Women taking off their head scarves is going viral in Iran

The Facebook page, Stealthy Freedoms of Iranian Women, has more than 185,000 likes.

Remember the climax of Sex and the City 2, where all the Muslim women removed their head scarves to reveal they were wearing high-fashion couture, thus proving they were as “liberated” as their Western counterparts? Well, this is kinda like that, but not dumb and offensive: Thousands of Iranian women are uploading photos and videos of themselves taking off their traditional head scarves, or hijabs, and posting them to Facebook.

Most of the videos are being posted to the Facebook page Stealthy Freedoms of Iranian Women, with the hashtag #mystealthyfreedom. Since the page went live earlier this month, it’s received more than 189,000 likes on Facebook, and thousands of women have posted images and videos of themselves not wearing the hijabs in various public places, from subway cars to next to the Ayatollah’s office.

“Stealthy Freedoms of Iranian Women” was created by British-Iranian journalist Masih Alinejad, who launched the page to protest against Iran’s 35-year-old ordinance requiring women to wear hijabs in public. But she wants to make it clear that she’s not urging Iranian women to ditch their headscarves: “I’m not fighting the hijab, I’m fighting censorship,” she recently told Time.

Whatever Alinejad’s intentions, the sight of thousands of uncovered women on Facebook has infuriated many in the Islamic Republic, where the rule of hijab is strictly enforced. The Fars News Agency has publicly denounced the page and Alinejad herself, accusing her of collaborating with Iran’s enemies to promote promiscuity.

The page even sparked a public protest in downtown Tehran last week, where hundreds of men and women chanted against women wearing a “bad hijab.” But if the jubilant expressions of defiance on the uncovered women’s faces is any indication, it’s clear that they’re paying little mind to their detractors.