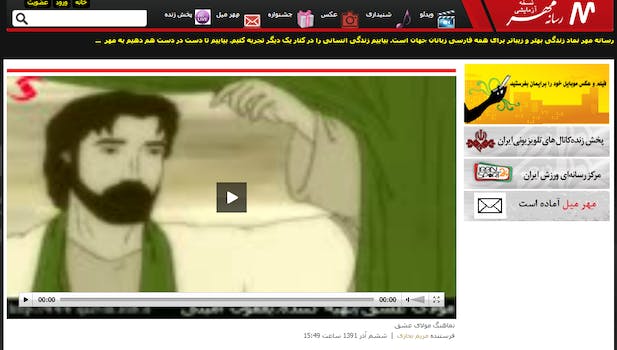 Early last year, reports appeared that Iran intended to build a “halal Internet,” using the Muslim term for what is morally “permissible.”

In October, concrete evidence of this shadow Internet began showing up, with secondary IP addresses being assigned to a large number of personal computers, as well as to some university, business, and government properties.

A further piece of that plan has now come online. Islamic Republic of Iran Broadcasting (IRIB) has launched “Mehr,” a kind of hyper-censored YouTube, approved for virtuous Iranian use. Mehr means “affection” in Persian.

It must be tough love.

AFP writes that Mehr “aims to attract Persian-speaking users and also promote Iranian culture, according to its About Us page.”

Iran has long been a bellwether of Internet oppression, its censorship and record of arresting social media users second only to China. Like China, Iran combines legal measures, social pressures, and technological innovations to shape and restrict electronic expression, as per Reporters Without Borders’ Internet Enemies Report for 2012 (PDF).

In February, Iranians were cut off from the Internet several times, and in September, partially in response to a reviled video about Islam’s prophet, the government blocked Google. When the last interruption ended, CNET noted, it came back on with access blocked “to all encrypted international sites outside the country that operate on Secure Sockets Layer protocol.”

Iran has censored YouTube since 2009, in the aftermath of the ill-named “Twitter revolution” in that country. YouTube was the host for a number of videos of brutality against voters, perpetrated by both paramilitary police and their unofficial militias, including the murders of Neda Agha-Soltan and Sohrab Aarabi.

Various spokesmen of the Iranian regime have explained its persistent censorship and the creation of this domestic Internet as a way to rid the country of “inappropriate” content. Now they have added defense against cyberterrorism as an additional rationale.