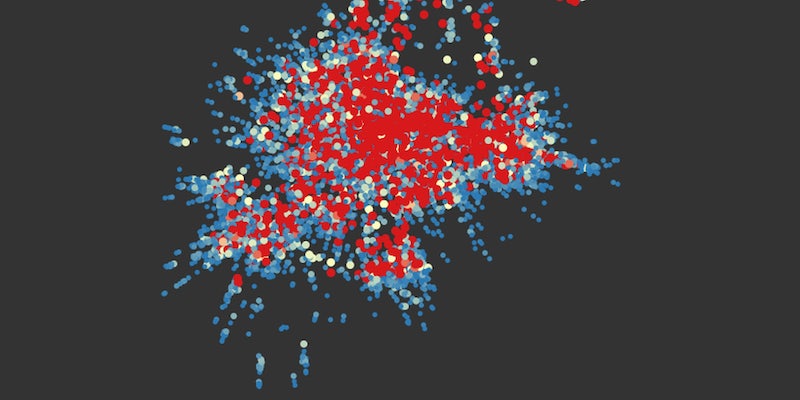 This interactive map is a peek under Reddit’s hood

“The link between /r/gonewild and /r/guns is a little odd.”

The social news site Reddit is divided into thousands of interest-specific communities, called subreddits. Thousands of these groups—ranging from broad topics, like music, to very specific and off-the-wall interests, like My Little Pony porn—manage to unite the site’s millions of users under several umbrellas. The idea is for redditors to explore and discuss their wide berth of interests without ever leaving the familiarity of the site.

On October 28, Michigan State University graduate research assistant Randy Olson, with the assistance of sociologist Dr. Zachary Neal, released “redditviz,” a study of how each of Reddit’s individual subreddits are connected to one another. Olson had previously graphed Reddit’s gradual shift from a social news site to a massive imageboard.

“This network visualization is my first stab at creating a tool for users to discover subreddits on their own,” Olson explained to the Daily Dot. “Search your interests on the network, zoom in and see what other subreddits are related to that subreddit, and explore from there.” 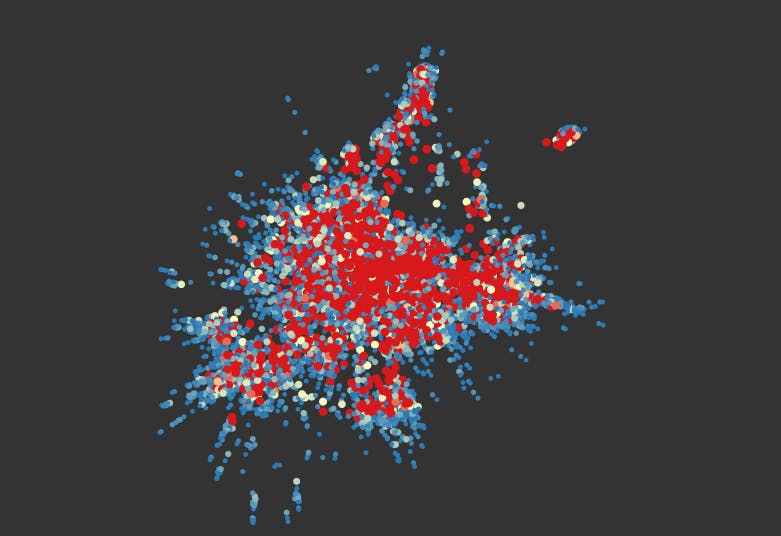 On redditviz, the subreddits with the most connections—and thus the most active—are represented with red dots. Naturally, all of the current and former default subreddits fall into this category.

Olson concluded that former default subreddit /r/politics was the most connected community on the site.

“It had thousands of new users joining it every day that then went on to find other subreddits more suited to their interests. Beyond that, it seems that redditors—regardless of their interests—are drawn into discussing U.S. politics in one way or another.”

He also noticed that many subreddits for U.S. cities and states were connected to the broader subreddit /r/sports, surmising that “the biggest thing folks have in common within a state is their love of sports.”

Of course, there are subreddit connections that are a little stranger.

“The link between /r/gonewild and /r/guns is a little odd,” he said. “There are some niche subreddits that have a surprisingly broad reach. For example, /r/Minecraft, /r/sex, /r/skyrim, /r/gonewild, and /r/gameofthrones are all related to hundreds of other subreddits somehow. I guess people from all walks of life love sex, games, and crying themselves to sleep because [George] R.R. Martin killed their favorite character.”

“It’s focused on a fairly specific interest, has a primary subreddit that serves as the entry point to the community (/r/MyLittlePony), and has an active and welcoming community (and wiki) that helps newcomers find their way into the niche subreddits built around that primary subreddit. All of those factors added together produce a healthy and growing Reddit community.” 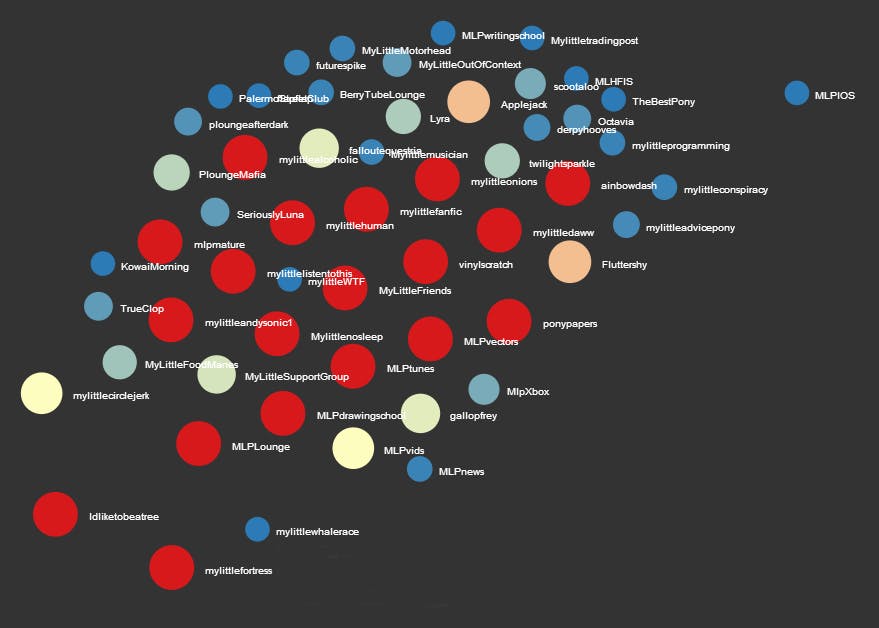 But what about the other end of the spectrum? Subreddits represented by blue dots that lie far from the bright red nucleus are very, very interest-specific—and often inactive. Examples include r/spiral_knights, a 1,000-subscriber-strong community that discusses nothing other than the MMORPG Spiral Knights. Also, r/scientology.

“Unless they become closely linked to a healthy (red) subreddit, they’re likely to die out soon enough due to inactivity,” Olson said.

With such subreddits sticking out like sore thumbs, could this be detrimental to the idea of Reddit being a common gathering place for all interests? Is there no place for you on Reddit if your primary interests do not lie in well-connected communities?

Olson believes that Reddit has taken the necessary steps toward welcoming potential redditors from all walks of life.

“Since my previous study, the reddit admins have done an awesome job at promoting smaller subreddits and customizing Reddit with multireddits,” he said.

If Reddit truly wishes to expand its reach—and become more than an imageboard where people share memes and celebrities shamelessly promote themselves—it should continue implementing such measures.