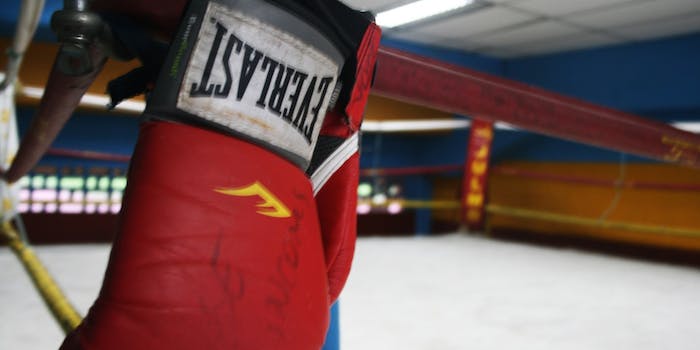 ‘Boxing mom’ Adrienne Ford on the road back, and her Indiegogo campaign to get there

Momma can knock you out.

Back in 2003 at the tender age of 21, New York native Adrienne Ford stepped into a boxing ring to compete for the first time. The event? None other than New York’s elite Golden Gloves tournament, where she faced off against the reigning national champion. She lost by a close decision, and then again when she competed in 2014, but this year’s bout went a little differently—Ford finally nabbed the coveted prize, a pair of small gloves made of real gold to wear around her neck. Now, with the help of an Indiegogo fundraising page, she’s headed to Ft. Lauderdale, Florida, to compete for a National Golden Gloves title.

“Competing in the Barclays Center is an awesome experience,” Ford tells the Daily Dot. “I’m glad that I had the opportunity to compete in the finals in 2014; I think it gave me an edge this year. I was calmer and not as overwhelmed by the crowd, cameras, etc. Competing in a stadium is a lot different than competing in a high school gymnasium. There’s so much stimulation, you have to be able to cut it all out and focus on your opponent and the task at hand.”

Though Ford had trained for a full year under her coach Lee Shabaka as part of his boxing and kickboxing club Team Freeform before her first competition, she then took several years off from boxing to focus on her career and family. She gave birth to twin boys, Austin and Aidan, in 2008. But she struggled with the resulting weight gain, and it put her ability to fight competitively on the brink.

“For the next two and a half years I only had time for them and work,” Ford writes on her Indiegogo page. “Nursing twins in itself is a full time job! I just didn’t have the time to care for myself and I continued my struggle with weight gain. In 2011, after I stopped nursing my boys, I was at my heaviest, 211 lbs.!”

Not one for settling, Ford returned to her sport of choice soon after. She explains that while she initially returned to Shabaka’s team in an effort to shed her baby weight, eventually she caught the “competitive bug” again, going on to face some of New York’s toughest ladies. She nabbed tournament titles across two different weight divisions in 2012, 2013, and 2015.

When she competed in 2014’s Golden Gloves tournament, Ford decided to leave her twin boys at home—though they were familiar faces at the gym where she trained, she knew they posed a risk for distraction in such a high-stakes environment. This year, however, they got ringside seats.

“It was awesome having them there,” she says. “I definitely won some cool points for competing in the Brooklyn Nets’ stadium. They’re big fans of basketball and I was able to bring them back to the visitors’ locker room so they can see where the Nets’ opponents prepare for their match and where I prepared for mine. It was great to be able to get away from the crowd and have a quiet moment to connect with them after my match.”

And how did they react to seeing their mom compete in a big-time boxing ring?

“Their reactions were kind of flat line,” Ford explains. “I think they were a little bit overwhelmed. Aidan was unsurprised by my win, stating ‘I thought you were gonna win anyway.’ It’s sweet that he holds me on such a high pedestal. Austin admitted he was concerned when my opponent started to hit me back, which was also sweet that he was concerned about me. One thinks I’m invincible and the other thinks I’m more fragile. It goes in line with their characters.”

The single mother of two tells the Daily Dot that she’s been training at least once a day for her upcoming national bout in Florida this week, and through the support of her friends and family she was able to arrange a week of childcare for her young twins. Though many of her expenses are covered by USA Boxing Metro, the Indiegogo account she set up aims to raise an additional $3,000 to cover costs for her trainer, Shabaka, to accompany her. Any funds raised beyond that goal, she says, will be donated to New York City’s Midtown West P.S. 212 Elementary School, where her children are students, toward a new playground.

“I hope the coverage inspires people,” she says of the media attention her story has been getting. “Especially women and mothers to be relentless about pursuing their goals. I think it sets an excellent example for our children on how to honor themselves and their talents; it takes hard work and persistence.”

Photo via Saúl Briceño/Flickr (CC BY 2.0)