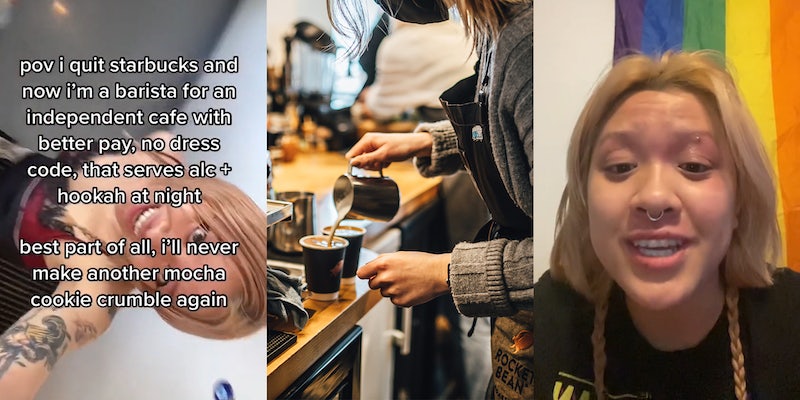 ‘I have yet to be paid for a single 8-hour shift’: After happily quitting Starbucks, barista says new coffee shop job has violated several labor laws

'Welcome to independently owned coffee shops where there are no breaks and the pay is dogsh*t.'

A barista shares their experience working for an independent cafe in California after quitting their job at Starbucks in a viral video. Less than two weeks later, they says they regret the decision.

TikTok user Jacqueline (@redm3at) first went viral Sept. 9 after sharing a video of them celebrating their resignation from Starbucks.

“Pov i quit Starbucks and now I’m a barista for an independent cafe with better pay, no dress code, that serves [alcohol] and hookah at night,” the overlay text in the original video reads. “Best part of all, i’ll never make another mocha cookie crumble again.”

Jacqueline’s triumph was short-lived, however, once they realized that their new job was a bit too lax in comparison to the giant coffee chain. The TikToker stitched their quitting video on Sept. 20, citing a list of labor laws the new cafe had allegedly broken.

“My first red flag should have been that they never took any paperwork from me,” they say in the clip. “I never signed a W-2, I didn’t clock in, I didn’t clock out. I have yet to be paid for a single 8-hour shift.”

They add that they weren’t given a legally mandated 30-minute lunch break and two 10-minute breaks for that shift, per California’s labor laws. Instead, Jacqueline was given a mere 15-minute break for the entire eight hours.

“The owner was constantly watching me through the security cameras,” they continue. “And he would text me to stand up if I ever sat down.”

The creator’s job update video has been viewed over 64,000 times as of Sunday. In the comments section, viewers urged them to file a complaint with the Department of Labor while others shared similar experiences working for local cafes.

“Small businesses are either great to work for or they violate every labour law out there,” a viewer wrote.

“I was boutta say every coffee shop I’ve worked for were independent & they were AWFUL,” a second shared.

“Welcome to independently owned coffee shops where there are no breaks and the pay is dogshit,” a third commented.

One viewer urged the creator to leave the job behind, claiming that it is not worth the violation of labor laws. “Please quit babes,” they commented.

Update 2:36pm CT Sept. 25: In an Instagram direct message correspondence with the Daily Dot, Jacqueline explained that they left Starbucks because the job no longer worked with their school schedule. While they noted that the coffee chain is a bit more careful with labor laws as a corporation, Jacqueline said they don’t plan to return to Starbucks.

“They have their own laundry list of issues that I don’t find worth dealing with,” they said of the company. “…Larger corporations have to be more careful with labor laws because they’re under a larger microscope and are afraid of repercussions. But I wouldn’t say that independent businesses are going to often abuse their workers because of this one experience. I’m sure there are others that are better.”

Jacqueline said they are currently seeking legal representation regarding the alleged labor law violations they experienced at their new job. However, in response to the video, they hope viewers take baristas’ concerns of mistreatment to heart.

“Baristas get a lot of hate from the public if we’re ever unhappy,” they noted. “It seems everyone’s allowed to complain about their jobs except for us. We get mocked for ‘not wanting to do our jobs’ when we are actually talking about mistreatment in the workplace. I hope people can find a way to see us as human beings.”