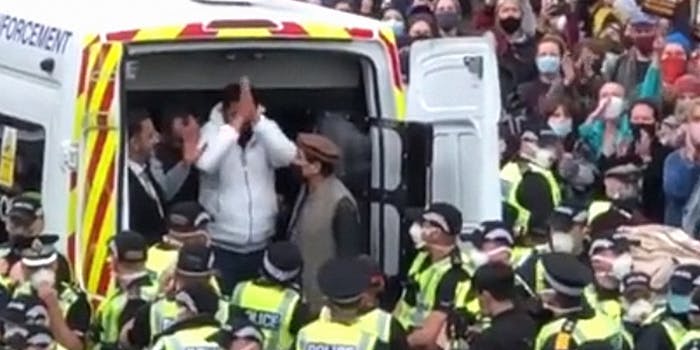 ‘These are our neighbors, let them go’: Protesters surround police van to demand release of immigrants

More than 6 million people viewed the video on Twitter.

A video with more than 6.2 million views on Twitter shows hundreds of people cheering and clapping as two men detained by U.K. Immigration Enforcement are released from a police van.

When the two Indian immigrants were detained Thursday in Glasgow, Scotland, hundreds of people surrounded the immigrant enforcement van and chanted, “These are our neighbors, let them go.”

One protestor laid underneath the van to prevent it from driving away. The Home Office, the ministerial department of the U.K. responsible for immigration and security, said the men were detained because of suspected immigration offenses.

“The U.K. government is tackling illegal immigration and the harm it causes, often to the most vulnerable people, by removing those with no right to be in the U.K.” a Home Office spokesperson said, according to the Guardian.

Glasgow has been known as the “dispersal city” for asylum seekers who are waiting for their requests to be processed and is the only dispersal area in Scotland that currently supports around 5,000 asylum seekers.

Dispersal is the process that accommodates asylum seekers until their application for asylum support is processed. According to the United Nations Refugee Agency, an organization dedicated to protecting the rights of refugees and displaced communities, most asylum-seekers in the U.K. come from Iran, Albania, Iraq, and Eritrea.

The video shows that as protesters crowded around the van, Police Scotland intervened, including some officers who showed up on horses. The No Evictions Network, a campaign against evictions and in support of asylum accommodation, said police presence escalated the situation rather than ensuring public safety. While protests were ongoing, the campaign told protesters to be careful but to stand their ground.

The man who laid under the van, a member of No Evictions Network, said officers were only a threat of violence that day.

“They were absolutely ready to go in mob-handed and clear the road even though the crowd included children and the elderly, and many were literally just standing outside their own doorsteps,” the man said in a statement. “It just goes to show how these ‘hostile environment’ policies start off criminalizing migrants, but quickly turn on anyone else who stands in the government’s way.”

Police Scotland said in a statement that it decided to release the two men later that day “in order to protect the safety, public health and well-being of all people involved in the detention and subsequent protest in Kenmure Street, Pollokshields, today.”

Lakhvir Singh, one of the two men detained, told ITV News that he was thankful for the protestors and felt so happy when the doors of the van opened. According to ITV News, the two men had been living in Scotland for 10 years but still did not have “leave to remain,” which is when refugees are given permission to stay if they qualify for asylum and the right to work and claim benefits.

“I’m so happy that my fate brought me to live here in Glasgow, where the people are so connected that they’ll come out onto the streets to help one of their own,” Singh said.

The announcement and viral videos shared across social media of the protest ushered celebrations online.

“I am so proud to live in a country where our community can do this – peacefully and together,” one user tweeted. “But dawn raids, the hostile environment: they are still here and they must end for good.”

Others chimed in on the aspect of community being the takeaway of the protest.

“Everyone trying to dismiss what happened in #KenmureStreet today as ‘mob rule’ is mistaken on one key point,” one user commented. “That wasn’t a mob. That was a community.”

The release of the two men coinciding with the celebration of Eid al-Fitr made it even more special for others.

“How beautiful a world would we have if every city was like Glasgow?” one user commented.