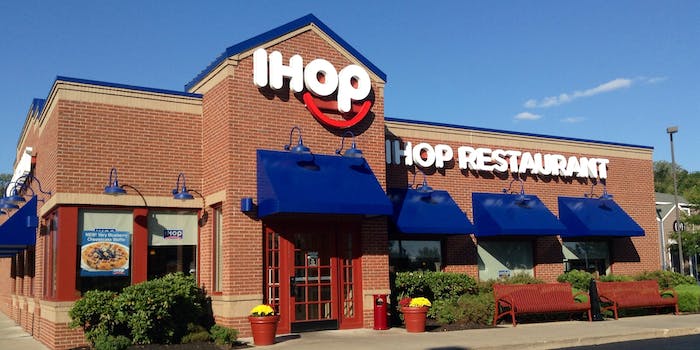 She told the other customer to 'go back to Spain.'

A woman waiting for a table at IHOP went off on a racist rant after hearing a nearby customer speaking Spanish.

Carlos Vasquez, who recorded the video and first posted it on Facebook, said that the woman started to go off on his mother, Norma Vasquez, in an IHOP in Los Angeles’s Koreatown after Norma spoke Spanish with her family.

The woman told Mrs. Vasquez that “we speak English in America” and told her to “go back to Spain.”

Vasquez immigrated to the U.S. from El Salvador in 1984.

Vasquez defended his parents, with his mother interjecting to defend herself too, as the woman rambled about Nazis and Castro and said that “Spanish is from Spain”—something she said she knew because she visited Spain.

By the end of it, Norma Vasquez was nearly in tears. She later said that she felt worthless because of the altercation.

“Inside, I wasn’t upset,” her son told NBC Los Angeles. “I got more upset when my mom started to cry. It wasn’t fair for my mom to cry to a stranger just because my mom was speaking Spanish.”