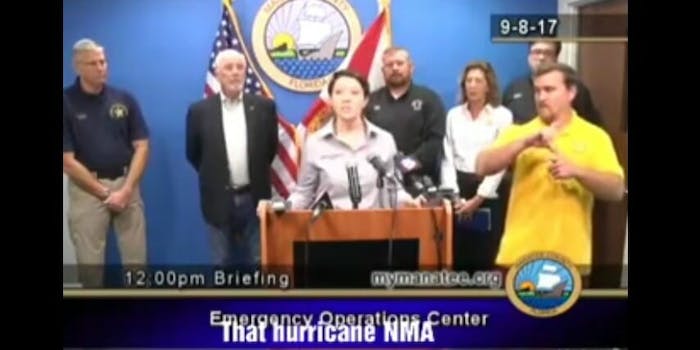 Apparently, he only knew these few words.

In the wake of the destruction caused by Hurricane Irma, several Florida residents rose to the occasion and performed heroic acts of kindness for their neighbors and fellow storm victims.

This sign language interpreter was not one of them.

Officials in Manatee County, Florida, recruited local lifeguard Marshall Greene to sign during a Sept. 8 news conference, during which they issued an emergency evacuation order, the Palm Beach Post reports via WFLA. The county was “in a pinch” and used Greene because he had “an understanding of sign language,” but apparently that understanding only allowed him to sign words such as “pizza,” “bear,” and “monster.”

Greene’s family stuck up for him in the midst of the criticism, saying, “He can’t expect to communicate something he doesn’t know.” Generally speaking, they’re right—the only problem is, he specifically performed this task based on the assumption that he did know sign language.

The deaf community was rightfully furious and demanded an apology from Manatee County officials. Some told WSVN the decision “was way too dangerous and put lives at risk.”

Perhaps the next time a massive hurricane sweeps through Florida, Green, if he wants to help people, can just lean on his lifeguarding skills.