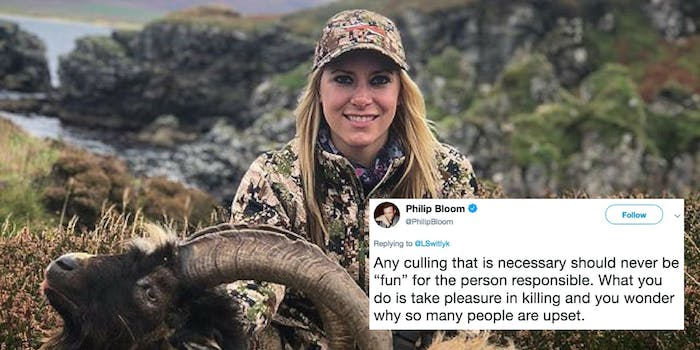 She went hunting, and got the internet's goat.

Hunter and show host Larysa Switlyk thought the Scottish goat that she had hunted was beautiful, but the internet had other adjectives in mind. After intense social media backlash over the photo, Switlyk has announced she’s taking a two-week break from social media, with Scotland’s first minister saying she is reviewing the situation.

On Monday, Oct. 22, Switlyk shared a photo to Instagram and Twitter taken on Scotland’s island of Islay. In the photo, Switlyk poses and smiles behind a “beautiful wild” Scottish goat that she had taken down during her hunt. She described the hunt as a hard two days, looking for the goats along the cliffs of the island, where they hide. The photo, while posted Monday, had been taken a month prior.

“Made a perfect 200 yard shot and dropped him with the @gunwerks and @nightforce_optics! (Good thing too because he could have ran off the cliff into the water),” Switlyk wrote in her Instagram caption.

Beautiful wild goat here on the Island of Islay in Scotland. Such a fun hunt!! They live on the edge of the cliffs of the island and know how to hide well. We hunted hard for a big one for 2 days and finally got on this group. Made a perfect 200 yard shot and dropped him with the @gunwerks and @nightforce_optics ! ( Good thing too because he could have ran off the cliff into the water). Ever interested in hunting Scotland and doing some whisky tours, email [email protected]

In another photo, Switlyk takes a pic of someone else on her hunt named Jason, who is sitting behind another animal carcass.

Despite Switlyk’s excitement for her hunt, her critics haven’t seen her haul as such. On Twitter, commenters have bashed her Scottish goat photo and her work as a hunter, criticizing her for taking joy in killing animals. While “culling” might be necessary, some argued that she shouldn’t be taking pleasure in the act.

Any culling that is necessary should never be “fun” for the person responsible. What you do is take pleasure in killing and you wonder why so many people are upset.

What does "hunted hard" mean? You had a gun, you are in camo, and you shot a goat. It takes a rotten psyche to find thrill in that.

Beautiful until you murdered it, you animal. Actually, that’s offensive to animals. You’re just scum.

While her photo on Twitter received more than 450 retweets and nearly 2,000 likes, the more than 17,000 responses, mostly negative, cracked down on Switlyk’s celebration.

This is truly SICKENING! Someone comes to beautiful Islay in Scotland and decides to kill a wild goat and pose with it. This breaks my heart. We are better than this. This needs to stop! https://t.co/lqNui6Xja7

“A unique hunt?”
Disgraceful. It’s a goat. And it’s in Scotland. On a beautiful island. Stop this pls @scotgov. 🤬 https://t.co/7UE7QYSW94

Despite the backlash, however, some tried to explain why hunting for wild goats, or “culling,” would be necessary—to counter overpopulation and prevent subsequent environmental damage. According to the Guardian, the Scottish government says “responsible and appropriate culling of some wild animals, including deer and goats, was not illegal.”

For the pig ignorant. Estates offer wild goat hunting, as with deer. As man is the only predator for both species, this is essential for herd management, population control and thus preventing environmental damage caused through overgrazing. https://t.co/IgnFNPiOLj

The backlash against Switlyk, however, does have the Scottish government troubled. Scotland’s Secretary of Environment, Climate Change and Land Reform Roseanna Cunningham said on Twitter that it will review the culling situation, and see whether “any clarification of or changes to the law might be required.”

The First Minister Nicola Sturgeon echoed these sentiments on Twitter, writing that it was “totally understandable why the images from Islay of dead animals being held up as trophies is so upsetting and offensive to people.”

Totally understandable why the images from Islay of dead animals being held up as trophies is so upsetting and offensive to people. @scotgov will review the current situation and consider whether changes to the law are required. https://t.co/SIQxcEYBzR

Switlyk, however, seems not to share such regrets. In her latest social media post, shared to Twitter and Instagram on Wednesday, she wrote that she will be “out of service” for the next two weeks during her upcoming hunting adventure. She also pushed back at the “ignorant people out there sending me death threats,” telling them “to get educated on hunting and conservation” while she’s away.

My ride has arrived ~ I’m headed out on a bush plane for my next hunting adventure and will be out of service for 2 weeks. Nothing better than disconnecting from this social media driven world and connecting back with nature. Hopefully that will give enough time for all the ignorant people out there sending me death threats to get educated on hunting and conservation. FYI , I was in Scotland over a month ago …

Two weeks might be enough time for Switlyk to recover from her social media backlash and death threats, but it’s also enough time for the internet to rest and recuperate for their next cycle of outrage, waiting to see what Switlyk might post next.