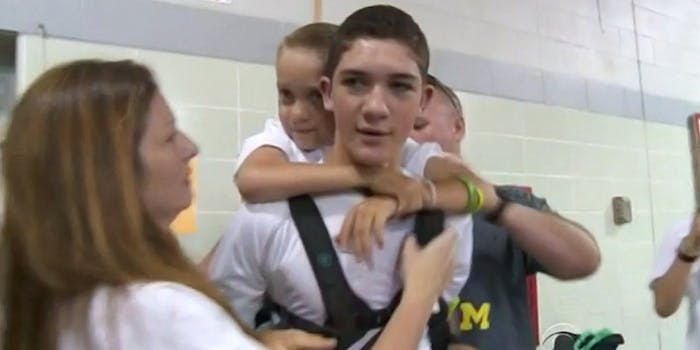 On Saturday morning, 14 year old Hunter Gandee started a journey from Bedford Junior High in Temperance, Mich., to the University of Michigan in Ann Arbor. It’s a 40-mile walk, and he was attempting to do it with his little brother on his back.

7-year-old Braden Gandee has cerebral palsy, and often uses a walker or power chair to get around. The walk was meant to raise awareness about the disorder, and the event, in which friends and family joined the Gandee brothers on their epic walk, is called the Cerebral Palsy Swagger.

Dave Mustaine, singer of metal band Megadeth, and representatives from the Detroit Tigers have apparently already made donations. The Gandee family is not specifically asking for donations; rather, they’re directing interested parties to the University of Michigan Cerebral Palsy Research Program.

Hunter is a trained wrestler and football player at Bedford Junior High, which no doubt prepared him for the trek, and the extra 50 pounds of weight. The Cerebral Palsy Swagger Twitter account has been keeping fans updated on the walk.

At our first stop! 3 down 37 to go! pic.twitter.com/P6ZQnsmZiH

At the Milan Grill after 25 miles. We are so proud if the boys and thankful for all of the support we have received:) pic.twitter.com/3qHGRe5hWc

We have about 4 more miles to go!

Hunter told CBS News that he hopes future research can develop new ways for Braden to get around easier. Carrying his brother for 40 miles, in an effort to get to that research, is certainly one of the most powerful ways.