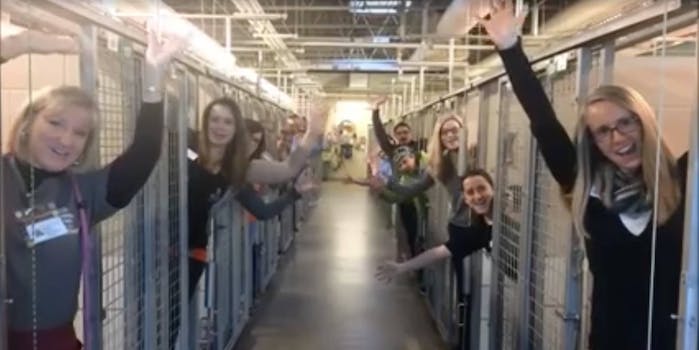 They're empty (dog) nesters for the day.

One animal shelter is celebrating a different meaning of “home for the holidays” this December.

The Humane Society of the Pikes Peak Region in Colorado Springs, Colorado, is giving cat and dog adopters a deal for the season—until Dec. 31, adoption fees are waived for animals 5 years and older. And the promotion is working.

On Monday the shelter posted a video on Facebook of the staff celebrating having adopted out all of their available dogs for the second day in a row. Given the fact that 31 percent of dogs in shelters end up being euthanized, this is amazingly exciting news more than worth cheering for.

According to the shelter’s post, they’ve adopted out 25 cats and 23 dogs as of Monday.

“What happens when your last available dog gets adopted? Your staff and volunteers jump into the kennels to celebrate!” the post reads. “We’ll have more dogs available later tonight or tomorrow. Keep those adoptions coming!”