How I learned a second language on Skype

I’ve been paying a Brazilian women to Skype me. Yes, I’m trying to learn a new language again.

I understand that recent changes in my behaviour have become a source of increasing consternation for those close to me. I’ve been disappearing every day during the afternoon, locking myself into a room with my laptop, and emerging 45 minutes later looking drained and in need of a chocolate biscuit. I owe it to my colleagues and family to come clean

The truth is I’ve been paying a Brazilian women to Skype me. Yes, I’m trying to learn a new language again.

My Skype escapades are just the latest in a long series of attempts to become bilingual. First there were 10 years of Welsh lessons in school—I’m still none the wiser. Then came a few years of French—I couldn’t order a freshly baked croissant in Paris to save my life. Finally, last year I tried to learn Turkish using freely available Internet resources—and I failed miserably. Again.

For my Turkish escape, I tried all the major language learning websites including the much-hyped busuu and livemocha. They all sucked pedagogically, with most attempting to teach multiple languages from the same teaching template. My best bet would have been to download a textbook and work through it the old-fashion wayed, but with a track record like mine, I feared I lacked the aptitude.

With a vacation to Brazil coming up, I was determined to try and nail down some basic Portuguese. Private lessons in London would be prohibitively expensive (at least $50 an hour), but after doing some research I thought I’d found a solution—Skype lessons.

The premise is simple: All around the world are qualified language teachers with unscheduled teaching hours in their day. A raft of new websites are offering to connect students with these instructors for on-demand language lessons through live video conferencing.

After a quick Google search, I chose a site, Lingo Live, because it was the cheapest and I’m cheap. The next step was to choose a teacher. While soliciting such services in real life would have meant replying to the least dodgy-looking Craigslist ads and spending a day chasing people on the phone, choosing an online teacher was a revelation. 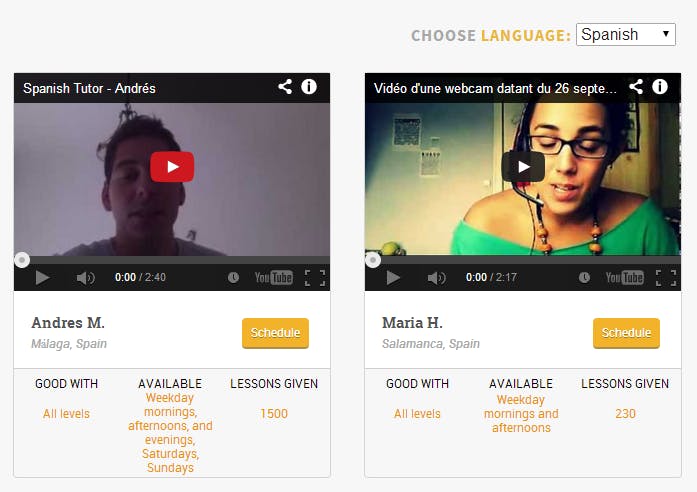 Each teacher had made a short YouTube video in which they touted their services. There was Luciana, originally from São Paulo but now living in Spain; she started teaching online in 2010 and has given over 2000 lessons. Alternatively I could had gone for Marcel from Belo Horizonte who has only given around 400 lessons or Carla, a globetrotting teacher originally from Santa Maria who has eight years of experience and promised she was “fun.” I decided to try Ana, originally from Rio de Janeiro; she is studying for a Postgraduate degree in Applied Linguistics in Belgium. She seemed like the person least likely she wouldn’t get too angry with my shambolic grasp of basic grammar.

I signed up for a free lesson, stumbled through the basics of introducing myself, then took the plunge and signed up for 20 lessons at what worked out to be $29 per hour.

Shortly after clicking buy, a targeted ad on Facebook offered my a sizeable discount code for the site I’d just bought from. I kicked myself.

Who are the teachers?

The teachers on the site I used were young, well educated and often well travelled—characteristics that are uniform across the whole industry. In the case of the most popular language to learn by virtual teacher, Spanish, this is particularly true. There’s no shortage of educated young Spanish speakers in Latin America and Spain who are all too keen to be earning multiple times their respective countries minimum wage by coaching dumb Anglophones like me.

Typically teachers have relevant degrees in education and linguistics as well as prior experience teaching. The director of Lingo Live, Tyler Muse, told me that the teachers using his service wouldn’t have difficulty finding work if his site didn’t exist. They are turning to Skype tuition because it pays well and gives them flexibility. Other reasons teachers gave for teaching onlines included the comfort of working from home, not having to spend resources on transportation, and the ability to move and schedule extra classes easily.

The teachers tick the hours they are free on a calendar, giving them complete freedom over their working hours. Of course, the same freedom goes for the students like me; I simply had to click the slots wanted, fitting in lessons around my daily schedule.

So, how did my pre-vacation language crash-course go? Well, first of all, I didn’t quite manage to fit in all 20 lessons—unorganization on my part and illness on my instructor Ana’s meant a few days were lost. That would have been somewhat of an inconvenience if I was meeting with a tutor in real life, but the casual nature of the teaching arrangement meant the disruptions this caused were minimal. And as for the teaching itself? I wouldn’t quite say I learned more Portuguese in a month than I did Welsh in 10 years, but it’s not far off.

No matter how advanced a language learning app you use or how much you pay for Rosetta Stone, nothing beats one-on-one instruction. Skype might not feel intimate enough for personal conversations and too restricting for business meetings, but for teaching and learning it helps facilitate a casual yet deliberate atmosphere.

Taking lessons online is effective and affordable. It’s a case of the Internet facilitating the globalized economy at its best. Teachers are afforded well-paid flexible work and students are given access to affordable on demand tuition from well qualified professionals.

As for me, I’m going to keep spending lunchtimes hidden away with my webcam. I’m not giving up this time.