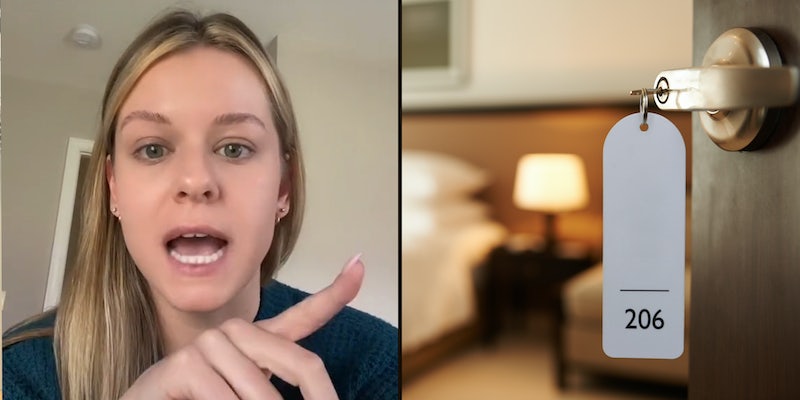 'Traumatized, but we got free parking!'

A TikTok recounting a scary experience of a hotel room intrusion has gone viral, with the user imploring viewers to “always latch your doors.”

In the video, which has over 700,000 views, user @devon_rogerss explains that she and her mom stayed at a hotel over the weekend.

“We passed a guy in the hallway, he’s pushing trash bins. My mom stops him and is like, ‘Oh, are you housekeeping? Do you have any extra soap?’ And he responds, he’s like, ‘No, I’m not housekeeping,’ and he’s on his way to the elevator.”

Upon returning to the room, her mom has a shower and the user shuts, latches, and locks their hotel door. “She’s in our room and a towel about to be getting changed,” the user continues. “And all of a sudden I hear our door slam open, but it gets caught in the latch. Because remember, I had latched it.”

She added that her mum ran to the door and saw the man they just passed in the hallway, and when the mother called out to him he ran away, saying that he was housekeeping.

“It just serves as a reminder that you need to be latching and locking your hotel room door at all times,” the user said. “Like, no matter what time of day.”

The TikToker then explained more of what happened with a follow-up video, adding that the hotel gave them free parking following the incident.

According to the user, the mother called front desk to ask if there were any male housekeeping staff on duty, to which the front desk staff replied that there weren’t.

“So then we start freaking out because we’re like, why is he trying to enter our room?” The user said. The person at the front desk then said they would call security, and called back ten minutes later to tell the user and her mother that the person was a new hire who got the number of the room he was supposed to be going to mixed up.”

“Whatever is true, I don’t know,” the TikToker said. Latch your hotel room doors. Thank God ours was latched, because he would have been in our room.”

Many TikTok users flocked to the comments to share similar experiences. “I was a flight attendant and this happened to me in the middle of the night,” one user said. “Luckily, latch was on. I know it was not an accident.”

“In Vegas, we has someone slid a steel bar under our door.” another revealed. “I guess this is a strategy to unlock the door.”

Other commenters were less than impressed with the hotel’s response to the incident. “All you got was free parking?” One user asked. “I would’ve got my money back, called the police to the hotel. They don’t want police outside the hotel because it makes them look bad.” The hotel’s strange reaction to the incident even led to some commenters becoming suspicious. “Front desk definitely covered it up,” another comment read. “I think they ‘found’ the wrong guy,” a further read. “Who forgets they work there?”

“I stay in hotels for work a lot, and the best advice I can give is don’t trust anyone,” another commenter advised. “Especially someone with access to key cards.”

The TikToker did not immediately respond to the Daily Dot’s request for comment via email.