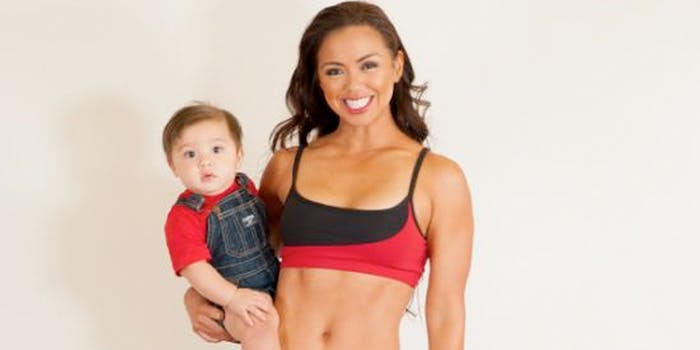 Body acceptance is good, Kang wrote, but “normalizing obesity” is not.

Maria Kang, Facebook-famous ab-baring, “no-excuses” fitness blogger, is facing criticism for some comments she made about obese women purchasing lingerie. In response, Facebook removed the offending post and shut down Kang’s account. It has since been reinstated.

Kang, a California woman and mother of three, last made headlines this year when she posted a photo of herself in a sports bra, looking fit and posing with her sons, and wrote, “What’s Your Excuse?”—i.e., for being overweight. Kang is a fitness blogger, and her most recent Facebook post is being called bullying and hate speech. It was a response to an article in the Daily Mail titled “Because Life Is Not Photoshopped,” about Curvy Girl Lingerie, which featured photos of plus-size women posing in lingerie to show off their “real beauty.”

Kang told News 10 she doesn’t want people to look a certain way; she wants them to be healthy. She logged onto her Facebook, where she has 233,000 followers to post a rant, warning, “Venting ahead.”

“We need to change this strange mentality we’re breeding in the US,” Kang wrote. She said body acceptance is good, but “normalizing obesity” is not:

The popular and unrelenting support received to those who are borderline obese (not just 30-40lbs overweight) frustrates me as a fitness advocate who intimately understands how poor health negatively effects (sic) a family, a community and a nation.

Facebook told News 10 in a statement that Kang’s post and page were removed in error after being reported. The company said it restored Kang’s Facebook page two and a half days later and apologized for inconveniencing her. The company did not restore the original post. Kang, as a “fitness advocate,” said her freedom of speech was impeded upon.

“I’m not going to stand here and say that being obese is okay,” she said, “and that we should accept that as the norm.”