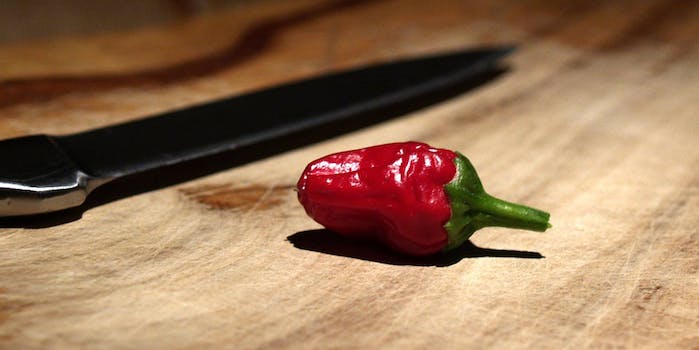 It's not a joke if it can send you to the hospital.

You may recognize Brad Holmes from his viral Valentine’s Day video, in which he appears to propose to his girlfriend, Jenny Davies, only to last-minute ask her to make him a cup of tea. In his most recent video, he decides to “prank” her by rubbing hot chili all over a tampon.

Holmes records himself rubbing chili over an exposed tampon, then repackaging it to make it look like it was untampered with. He then sets up a camera in the bathroom and waits until she uses it. Soon, she begins to feel pain, and he records her becoming increasingly concerned over what’s happening to her body.

“It’s on fire. Why are you recording?” she asks, while he laughs.

Capsaicin, the active ingredient which causes the burning sensation in hot peppers, is used in some topical pain relievers, and has even been used to treat vulvodynia. However, too much can be dangerous, especially in delicate mucous membranes of the vagina. It can cause inflammation and severe pain. According to Jezebel, women have had to go to the hospital for accidentally getting it on their genitals.

Davies is part of Holmes’ online pranking brand. In fact, after the Valentine’s Day prank, she pranked him back by saying she was pregnant, and once planted a used condom in their bed to make him think he had cheated on her. Given that prank videos are these two’s bread and butter, it’s not ridiculous to assume that this whole thing is fake.

However, if it’s not, there is a big, big difference between “pranking” someone by faking a proposal, and causing physical harm. That’s not a prank—that’s just abuse.