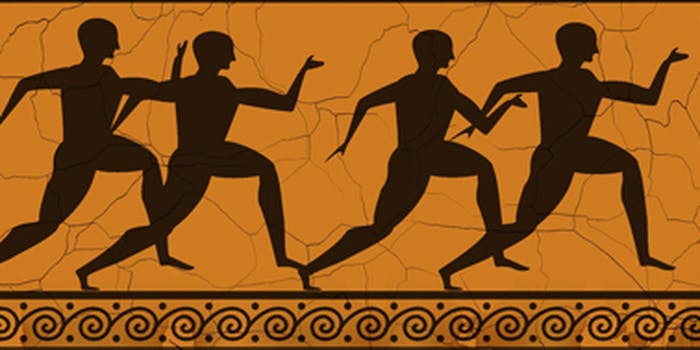 Through the few stories we have from ancient Greece, like Homer’s Odyssey, scholars try to understand what human life was like thousands of years ago. But it’s difficult to separate the fact from the fiction in epic poetry about mythological gods and heroes. In a study published this month in the online journal arXiv.org, researchers have turned to an unlikely source for help: social networks.

In the past decade, the widespread adoption of online social networks has given scientists a wealth of new data about the way human beings form relationships. According to MIT’s Technology Review, “the general properties of social networks seem to be invariant regardless of where they crop up.” For example, we tend to form tightly knit groups, known as clusters. As a result, no two people are more than five or six degrees apart.

This property, known as the “small world” phenomenon, was actually discovered in the 1960s, by a Harvard social psychologist named Stanley Milgram. Milgram sent letters to strangers across the country, asking them to return the parcels to his address in Boston. The catch: they had to mail them to someone with which they were on a first name basis. Those people. in turn, did the same. Surprisingly, the parcels often got back to Milgram through only five or six connections.

Milgram’s study was exceptionally clever in the days before online social networks. But of course, it would be of little use in dealing with Homeric texts. It is only since the rise of social networks like Facebook and Twitter that such analysis has become possible.

The results aren’t a given. According to Technology Review, last year researchers performed a similar study on the English work, Beowulf, Homer’s Iliad, and the Irish poem Táin Bó Cúailnge: “They discovered that while the networks associated with Beowulf and the Iliad had many of the properties of real social networks, the network associated with Tain was less realistic.”

Of course, their were fictional elements in the Odyssey too. “Classic narratives tend overall to be based on some historicity mixed with some sort of myth or legend,” the researchers wrote, “turning a historical document more attractive to be passed throughout generations.” But when they controlled for these elements, they concluded “mythical elements on Odyssey’s epic drag the network to a ﬁctional aspect, ergo its fundamental background is purely real.”

“No matter how different our society may appear to be from those that existed many centuries ago, they also have remarkable similarities,” wrote Technology Review. “Indeed, if Milgram were able to repeat his small world experiments in ancient Greece, he’d probably get the same result. And Homer would undoubtedly feel right at home on Facebook.”