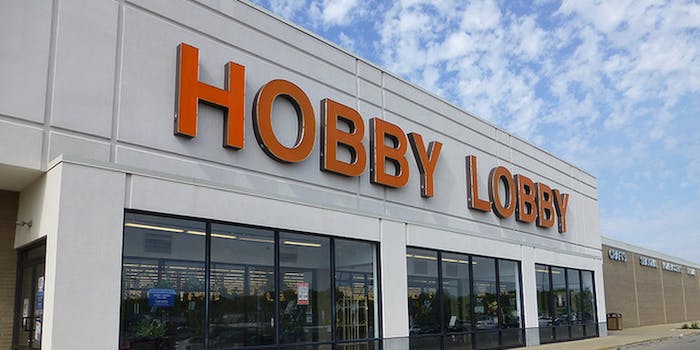 In the case of #HobbyLobbyRules, “rules” is not a verb.

Hobby Lobby, the national retailer of crafting supplies and seasonal home decor, has taken a very definitive, very public stance against the Affordable Care Act. More specifically, its provisions for birth control and what the availability of certain contraceptives could mean for their family-run business. Hobby Lobby’s so concerned about it that the company’s taken its case to the Supreme Court.

David Green, Hobby Lobby’s founder and CEO, stated that this case is about “the right of our family business to live out our sincere and deeply held religious convictions as guaranteed by the law and the Constitution.”

Hobby Lobby’s challenging four of the proposed contraceptives, including Plan B, which “potentially terminate life,” though the company says it supports 16 other “FDA-approved contraceptives required by the law that do not interfere with the implantation of a fertilized egg.” This isn’t the first time Hobby Lobby has decided to single out a group based on its religious beliefs.

As often happens with cases of bigotry, racism, and sexism, Twitter has been rallying around a hashtag, #HobbyLobbyRules, created by TBogg. In this case, “rules” is not a verb.

#HobbyLobbyRules All female employees must learn embroidery starting with the letter A. pic.twitter.com/nu8JbBMFD1

#HobbyLobbyRules If anyone shalt worship other religions within the store,they shall be stoned (Stones:$2.99 for 3lb) https://t.co/wDPFdUSj7M

.@treelobsters Accuse one of your neighbors of being a witch and get 10% off of your next purchase! #HobbyLobbyRules

As invigorating as it is to poke fun at Hobby Lobby’s outdated beliefs, the Supreme Court agreeing to hear the case in 2014 could have potentially negative effects on other businesses that provide medical care for employees, allowing for countless other exceptions based on religion, and could once again restrict access to reproductive health care. Further, Hobby Lobby’s claim of “conscience protection” is pretty convenient. This piece from Annalee Flower Horne, a Quaker, is an excellent take on the situation:

“If the Green family’s conscience really forbids them from meeting their legal obligations under the Affordable Care Act, then they have the option to arrange their lives so as not to incur those obligations” Horne wrote. “They can choose not to run a two billion dollar corporation.

“But if they’re not willing to make those sacrifices–if their ‘conscience’ only compels them so far as they can follow it for free–then they are not conscientious objectors.”