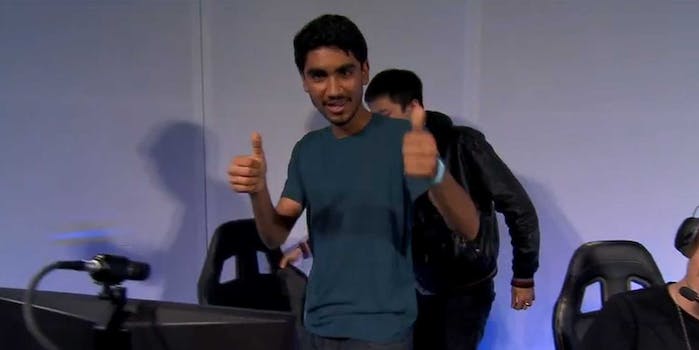 His name is Darshan, but even his teachers call him ZionSpartan.

Eighteen-year-old Darshan Upadhyaya is many things: a League of Legends expert and champion, an articulate high schooler, even a minor celebrity. But there’s one title you won’t be able to slap on him: college student.

Better known by his online handle ZionSpartan, Upadhyaya has recently made the unorthodox tradition to “go pro” as a professional League of Legends player instead of following his fellow graduating seniors off to college.

His decision was far from hasty. The Poway, Calif. resident holds several major championships as a member of Team Dynamic, a gaming organization that sponsors competitors for League of Legends and other e-sports games. In early 2013, he and his team members split from Team Dynamic and founded Good Game University, now labeled Team Coast.

The first achievement of ZionSpartan’s new team was an impressive victory in the April 2013 North American LCS Qualifier. Their second-place finish, which earned the team a $25,000 prize, qualified its participants for a summer playoff session.

In a short video documentary, ZionSpartan’s high school teachers reveal that not only is he a major celebrity at school, but also that they have taken to addressing him by his handle.

Several YouTube commenters echoed the sentiments of ZionSpartan’s parents and teachers and support his decision to forego college.

“The kid just graduated high school and is going after a once in a lifetime opportunity for something he loves? to do. Who says he will be doing this for 10 fucking years? Maybe just a few to see how it goes,” Stammpyz wrote.

“If the kid finds a way to make money doing what he loves then good for him. Just because he’s going to “play video games for a living” doesnt mean he wont do other things in his life,”  DtotheRadify wrote.

Others, however, did not feel that ZionSpartan’s decision was worthwhile, taking the time to poke fun at his life choice. As e-sports are not actual physical activities, many commenters felt that ZionSpartan was largely wasting his time.

“This kid really need a life. ? Esports aka video games are fun, but people are taking it way too far. It’s really just a game,” Roger Kabbit commented.

“Oh how charming; playing video games for a living. What a great way to contribute? to the world,” Rodney Beacham wrote.

Redditors were a tad more understanding when the video was posted in the r/leagueoflegends subreddit.

“It’s always awesome to hear of people who pursue their passion despite being told they can’t, and despite all the problems they may face IRL…

But it’s also really nice to see that there are plenty of parents, teachers, and friends who encourage others to do what they love and follow their dreams, regardless as to whether they’re ‘normal’ or not,” gbay99 wrote.