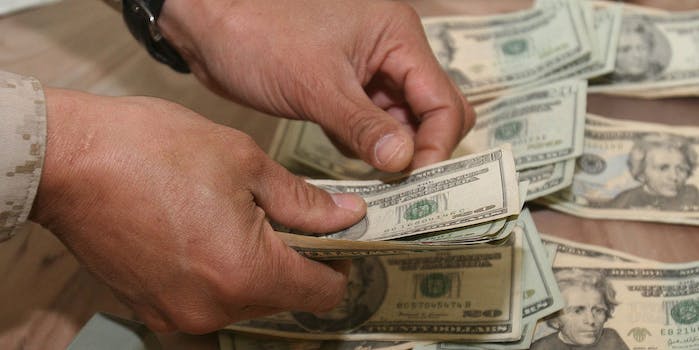 Is this the mystery tycoon behind @HiddenCash?

“None of those names are correct. None of them are me.”

The identity of a wealthy Twitter user who’s been hiding cash treasures along the West Coast may no longer be a secret.

Since the mysterious Twitter account @HiddenCash began leaving hundred-dollar jackpots around San Francisco for intrepid social media users to discover, imitators have been springing up like extremely generous weeds. Pretenders—all apparently giving out real money—have sprung up everywhere, from Montgomory, Ala. to Kansas City. Meanwhile, the U.K. now has its own imitator, @hiddencash_UK, as does Edmonton in Canada.

@HiddenCash the tv popped on in the cafe and mentioned you so I looked to see one pop up just one block away!! pic.twitter.com/TJ3t3Xg94I

@HiddenCash Omg again, this is amazing! We just gave away most of the money from the first one! GOD BLESS YOU! pic.twitter.com/AGneJSkwMz

The owner of the @HiddenCash account has thus far opted to remain anonymous, only disclosing in his original tip to magazine Bold Italic that he works in real estate and “made millions of dollars” flipping homes. He said his motivation was to give something back to the community. “I am determined to to give away some of the money I make,” he said. “And in addition to charity, to do it in fun, creative ways like this.”

But now, Inside Edition, apparently determined to rain on everyone’s parade, claims to have unmasked @HiddenCash. The publication alleges the owner of the @HiddenCash account is one Jason Buzi, a real estate tycoon in the San Francisco area.

“[H]e’s a real estate investor who has made a fortune flipping houses in the San Francisco Bay Area,” Inside Edition writes. “Buzi appears to be the benefactor who has left clues about where to find envelopes stuffed with cash all over the West Coast. His deeds have sparked copycats across the nation, and the world.”

When one of the magazine’s writers spoke to the owner of @HiddenCash on the phone, he denied he was Buzi. “Several names have been bounced around in the press,” said the anonymous cash-dropper. “None of those names are correct. None of them are me.”

There are some false rumors about who Mr. Hiddencash is, some naming our friends and others people we never heard of. Don’t believe it!

Inside Edition claims, however, that podcasts in which Buzi appears demostrate that his voice bears distinct similarities to that of whomever is behind @HiddenCash, suggesting the two are one and the same.

More compelling is that Buzi has a history of digital philanthropy. In 2008 he established the website cashtomato.com, which involved giving away tomatos and cash in the streets of New York. After one event sparked a riot in Union Square, the police asked Buzi to shut it down.

We can only hope that Buzi’s involuntary masking doesn’t dissuade him from further philanthropy (or make him a target for scammers and criminals)—though in the end, it may not even matter. The proliferation of copycats in recent weeks means the “Hidden Cash” movement is far bigger than just one man.