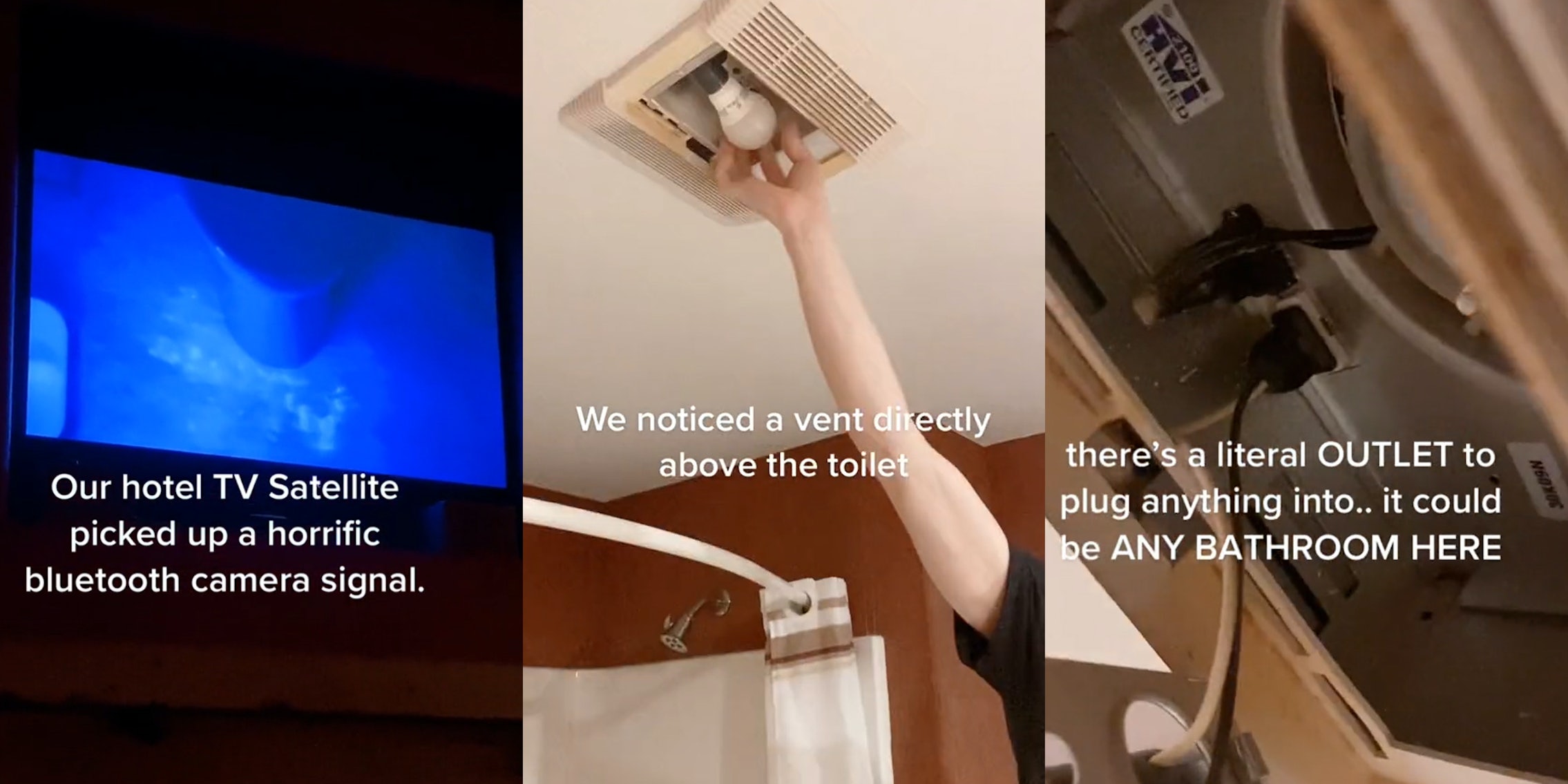 'There’s literally a station on the TV, and it’s a toilet.'

There’s a certain amount of trust that goes into staying in a hotel room, but for one TikToker, it turned into apparent nightmare fodder after discovering what appeared to be a hidden camera placed above one of the hotel room toilets.

TikToker @darbyjjones noticed it after flipping through the TV channels in her hotel room. She says that instead of The Devil Wears Prada, which is what was listed as playing on Bravo when she filmed it, the TV satellite picked up blue-tinted footage of a toilet instead. The camera was pointed in such a way that, according to Jones, it would capture a “straight crotch shot.”

“There’s literally a station on the TV, and it’s a toilet,” she says in the video, which was viewed over 4.7 million times. “It’s a fucking camera pointed at a toilet. There’s no sound, and it hasn’t moved in, what, 30 minutes?”

It’s unclear what hotel @darbyjjones was staying in.

The camera doesn’t appear to be situated in her bathroom. But what Jones did find in the bathroom was a vent directly over the toilet that includes an outlet that you could “plug anything into.” At the end of the video, Jones says the toilet footage “was on from 10:30PM-4:30AM then went back to normal BRAVO” and that “the Police & Hotel manager are checking all bathroom vents.”

Some urged Jones to call the police, while others brought up hearing about similar situations. But for many people, it made them think about the possibility that they had been, at one point, secretly recorded while on the toilet.

“My fear that cameras are always watching me is confirmed more everyday on this app,” one person commented.”

A couple of days later, Jones posted an update, which she said was partially also in response to a previous video she posted and deleted. In it, she explains her initial effort to alert hotel staff to the half-hearted effort she said the staffer—who she worried might have been behind the camera—made when checking the rooms for potential cameras installed in bathroom vents; the staffer, she notes, wasn’t able to find any cameras plugged into bathroom vents. She says she also got assurance she was given that the hotel staff would alert the police to the situation.

According to Jones, some of the criticism directed toward her was about why she didn’t immediately contact the police about the camera. She acknowledges that while she should’ve done that, she was shaken up by seeing it and trusted the hotel staff to contact the police as they said they would; she said the event left her traumatized, even as she compared what happened to a movie.

“It’s so hard to fathom, and also, you don’t know if it’s what you’re actually seeing,” she says. “And I trusted the staff—I know I shouldn’t have, but I trusted them. They told me they were going to call the police, so when I did call the police, and I was like, ‘Hey, just wanna make sure you guys know everything,’ and they were like, ‘About what?’ I was horrified.”

I’m going to put the video back up but PLEASE don’t call others names just because they handled something differently than you.

More support poured in for Jones in her latest update. As for what is happening now?

“It was only up for a couple hours in the middle of the night- the police are getting a search warrant for the hotel,” Jones answered in the comments when asked what the police were doing about the situation.

The Daily Dot reached out to Jones via TikTok comment.