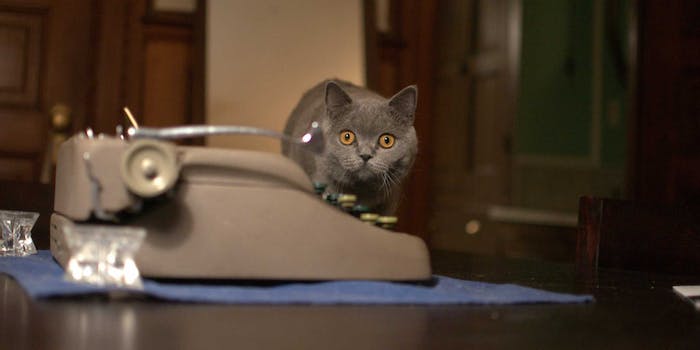 Want to know if you write like Hemingway? There’s an app for that

Now all you need is a colony full of polydactyl cats.

“The most essential gift for a good writer,” Ernest Hemingway once said, “is a built-in, shockproof, shit detector.” But why build it in if there’s an app?

“Hemingway”—the Web application, not the writer—annotates text, highlighting over-complicated prose and suggesting changes. There is more than one way of writing, of course, but for those of us who have a moral aversion to adverbs, it’s a helpful tool.

There will probably be plenty of intelligent things (both laudatory and critical) said about the Hemingway app, but I’m not smart enough for all that. Instead I’m going to plug in excerpts of some of my favorite authors’ writing and see what happens.

(Let us also set aside the argument over whether Hemingway’s prose was really as simple and terse as his reputation would imply. This is not the time or the place.)

So! Why not start with Papa himself?

There is nothing else than now. There is neither yesterday, certainly, nor is there any tomorrow. How old must you be before you know that? There is only now, and if now is only two days, then two days is your life and everything in it will be in proportion. This is how you live a life in two days. And if you stop complaining and asking for what you never will get, you will have a good life. A good life is not measured by any biblical span.

This paragraph from For Whom The Bell Tolls passes the Hemingway test with flying colors. Apparently it is written at a fourth grade reading level. (Can you imagine anything more insufferable than the fourth grader who reads and comprehends Hemingway?)

Then there’s the opening paragraph of John Cheever’s famous short story, “The Swimmer”:

Scholars might draw thematic and stylistic comparisons between Hemingway and Cheever, but they would be wrong—that third sentence is pretty long. At a 10th grade reading level, Cheever just barely passes the Hemingway test.

But hey, why not try something a little more contemporary? Here’s a pretty good post from The Awl’s Alex Balk:

The ground beneath your feet is pitted and wrecked, the mighty towers in which you took so much pride rain death down on the heads of those passing below, and yet another massive storm wends its way toward your desolate environs. Look upon the ruin that you call your city and despair, New York. This is what happens when you let the Democrats back into Gracie Mansion.

And a happy Wednesday to you too, Alex! Unfortunately you are writing at an 11th grade reading level. (11th grade?? Reel it in, buddy!) That first sentence is, apparently, “very hard to read.” Also it uses the passive voice.

Surely someone out there writing on the Internet today can take up Hemingway’s mantle?

In the dark of the room, her eyes were once again playing tricks on her. Nyx noticed strange shadows around the room that caused a twisting sense of fear to build in her chest. She felt defenseless again. Without all the power she’d had as a grown-up, the world was once again a threatening place.

It was a lot easier to be brave and courageous when one possesses enough magical power to fry almost anything with lightning.

Despite the fact that the world was a scarier place than when she was an adult, Nyx still found a reason to smile. She turned her gaze over to Twilight, who was lying in her own bed. She had a mother that loved her more than anything, one that she knew would never abandon her. It didn’t matter anymore that she was Nightmare Moon. That didn’t mean she had to be a monster or a bad pony. She didn’t have to be a tyrant or a queen. She could be a normal filly just like her friends and just be herself.

Yes! This is an excerpt from “Past Sins,” a work of My Little Pony fan-fiction. None of these sentences are “very hard to read.” None of them are “hard to read” at all! There are no adverbs. This is Good Writing.

And what about here on the Daily Dot? Here’s assigning editor Cooper Fleishman on Flappy Doge:

Maybe the meme-inspired knockoff means we’ve reached Peak Flappy Bird. The Internet has gone into hysterics since Nguyen’s announcement, and this surely won’t be the last imitator you’ll find. But in reality, all roads on the Web lead to Doge. The Guardian, Bitcoin, Rob Ford—there’s nothing so absurd that a derp-faced Shiba Inu can’t make it even sillier. Or even give it a second life.

Two of those sentences are “hard to read,” and there’s an adverb in there. But the paragraph tops out at a ninth grade reading level, so as far as Hemingway is concerned, Cooper is OK. Good job, Cooper.