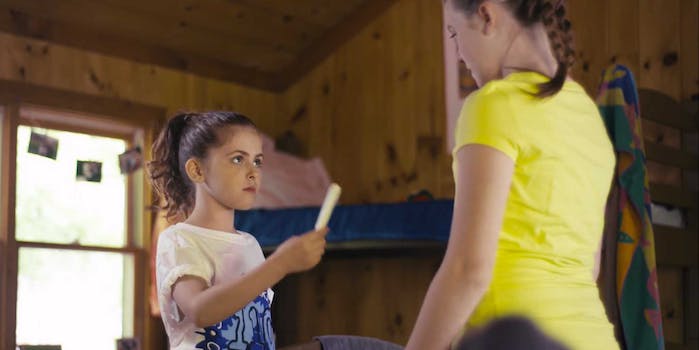 Is “Camp Gyno” the death of tampon ads as we know them?

"For these campers, I was their Joan of Arc," the Camp Gyno proclaims in HelloFlo's viral ad. "It's like I'm Joan and their vag is the Arc."

If you’re not sold on the company’s tampon delivery service, which sends pads, liners, candy, and assorted treats based on customers’ monthly cycles, from that tagline alone, watch the rest of this 90-second commercial that’s gone viral on YouTube that just might serve as the death knell for “blue liquid” ads.

The video is delightfully narrated by the Camp Gyno—that one girl who appears to know everything there is to know about periods.

“For these campers, I was their Joan of Arc,” the Camp Gyno says with obvious pride. “It’s like I’m Joan and their vag is the Arc.”

According to HelloFlo founder and CEO Naama Bloom, the idea came from a conversation she had about how young girls don’t often go straight to their parents when they first get their period.

“I was listing out my insights about the period experience and shared the story of the girl at camp that my friends and I all turned to for advice,” Bloom told Adweek. “When Pete [Marquis] said, ‘You mean like a Camp Gyno?’ we basically knew what we had to do. Only humor could tell this story in a way that would be relatable, endearing and shareable.”