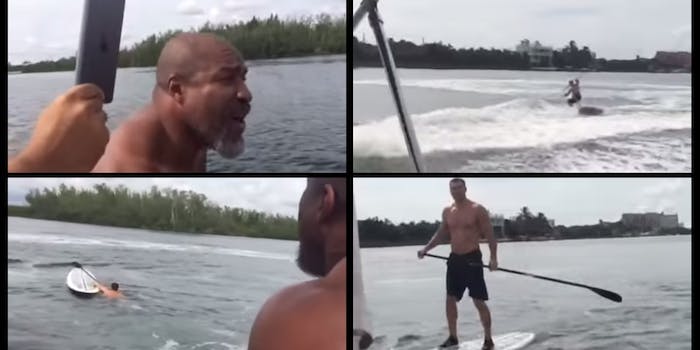 Shannon Briggs trolls opponent at sea, knocks him off paddleboard

This is some master trolling.

In an effort to talk Klitschko into giving him a title shot, Briggs has taken to stalking the heavyweight champ. “Everywhere you go, I go,” Briggs shouted as his speedboat did circles around Klitschko, causing his paddleboard to capsize.

This is the third time Briggs has been videotaped showing up uninvited and antagonizing Klitschko. Earlier this summer, he interrupted one of Klitschko’s workouts, and was recently filmed barging in on a brunch date between the champ and his friend.

Admittedly, each incident smells more like a WWE promo than it does a real-life confrontation. In fact, there are more than a few similarities between these videos and the “Drake vs. Blake” ESPYs sketch. But it doesn’t matter if it’s all staged—they’re still hilarious.

For Briggs’s sake, I hope if he does get his title shot that things don’t end like they did when he fought Klitschko’s brother, and wound up being hospitalized with numerous injuries.