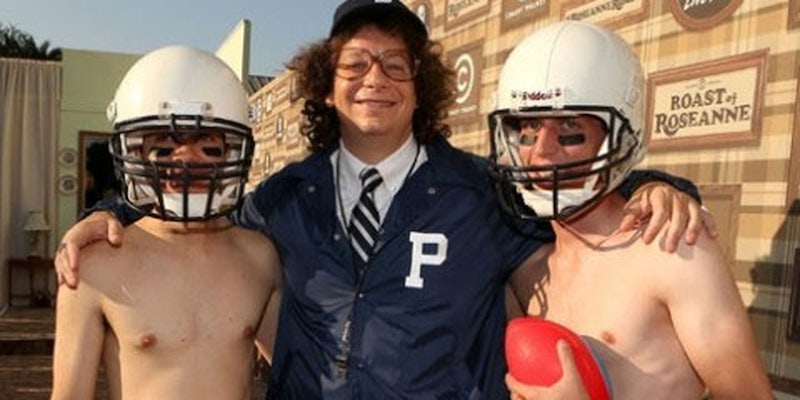 The other most tasteless Halloween costume: Jerry Sandusky’s child victims

You thought Trayvon Martin was the worst Halloween costume of the year? Think again.

Congratulations, modern civilization: Not only have some of us made Halloween into a spectacle for cultural appropriation and overt racism, but now we can add “pedophilia” to the mix of inappropriate Samhain cosplay.

Just days after Penn State announced a $60 million settlement for the families of the kids victimized by former assistant football coach Jerry Sandusky, the victims were back in the public eye—as Halloween costume themes.

Across the U.S. Thursday night, party-goers reported sightings of the “Jerry Sandusky costume” at Halloween events, usually worn by 20-something white men, most sporting a faceless young child doll attached to their groin.

@CoachDaleVogel I’m all ready for Halloween. My Jerry Sandusky costume came this morning.

I win the costume contest @ArtieLangeShow as Jerry Sandusky. Only here does a pedo get a medal. #halloweencostume

The costumes seemed clearly designed to spark outrage, and they succeeded.

Some kid just went apeshit on me for being Jerry Sandusky

While the costumes seemed widespread this year, they’ve sadly been in vogue since at least last Halloween, when scores of Redditors, whether ironically or otherwise, trotted out their best Sandusky impression. Last November Time reported a spike in Sandusky memorabilia on Ebay, and some people seem to be taking the costume as a sign of support for the former coach, who was convicted of 48 counts of child molestation.

If your jerry sandusky for Halloween your great #freesandusky

Might hand out candy next year dressed as Jerry Sandusky

It might be difficult to find the humor in dressing as a convicted child rapist on the one day when children are encouraged to approach adult strangers. Then again, Sandusky humor is a classic example of the age-old debate about when rape jokes are actually funny, and when they just promote harmful ideas about rape.

If the ultimate effect of seeing a Sandusky costume, complete with faceless victim attached to crotch, is laughter, then this is unquestionably a rape joke that falls into the latter category. It brushes off the harm and suffering of Sandusky’s many victims in the same way that Penn State higher-ups did when they brushed off initial reports of Sandusky’s crimes. And despite the fact that Sandusky’s own son added his voice to the number of victim testimonies after the trial was underway, many Sandusky supporters and media outlets still argue that the victims were lying in order to receive a sizeable payout.

Ultimately, as tasteless as the Sandusky costume undoubtedly is, it’s just one facet of the larger social reaction to rape in our culture. As long as we continue to think rape is funny, then tragedies like this one are just Halloween gags waiting to happen.

Photo via Waste the Day