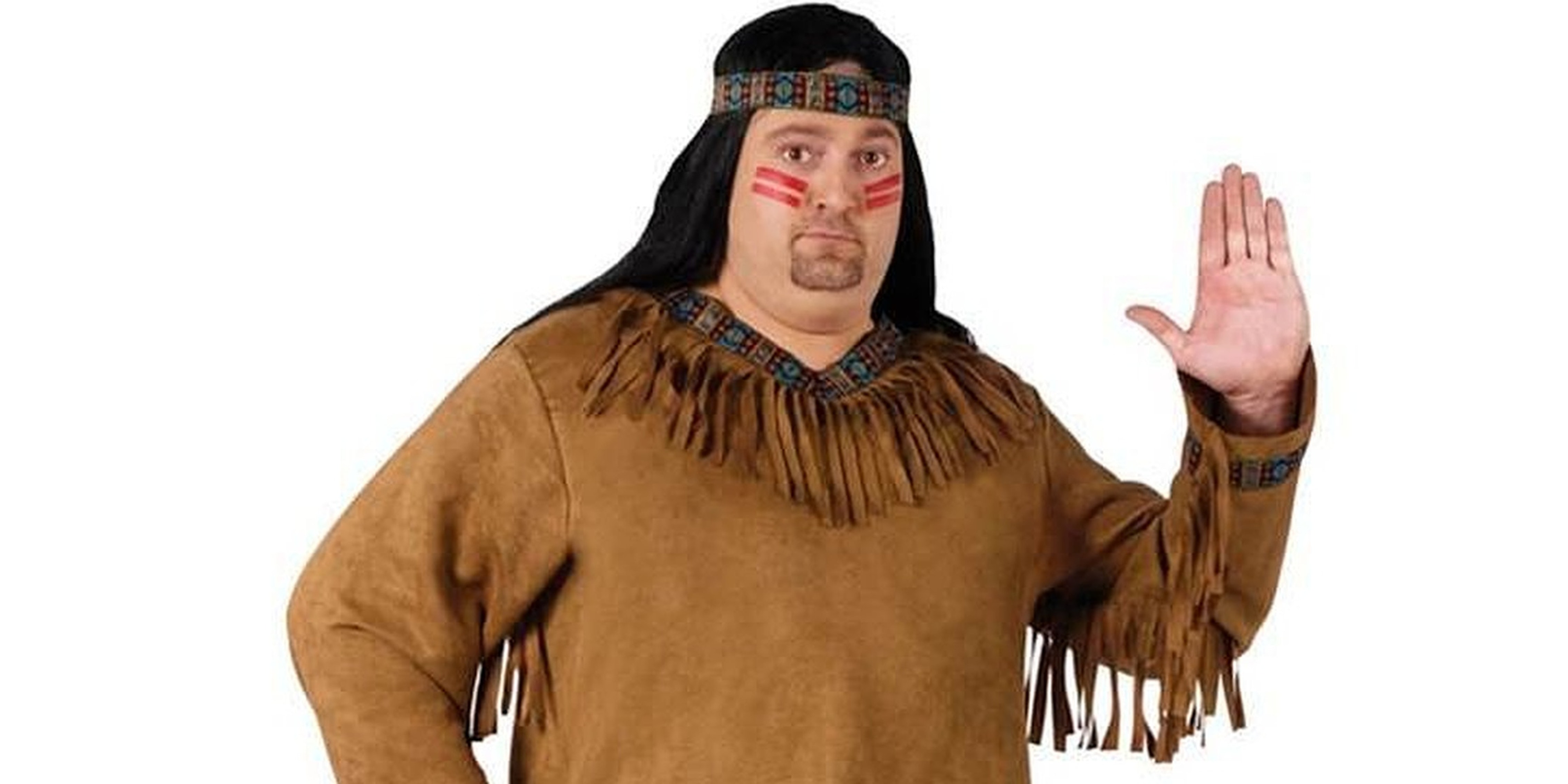 Because people still think going as 'Pochahottie' is acceptable.

Every Halloween, revelers seem to forget the lessons of Halloweens past and make idiots of themselves by dressing in culturally insensitive costumes, blackface, or other offensive getups. We’ve been over this, yet companies keep putting out pre-made costumes like “Pochahottie” or “Arab,” and unfortunately, people keep buying them.

That’s why DoSomething.org launched their 1 Star for Hate campaign, which encourages people to leave 1-star reviews on these offensive costumes:

Tell people why costumes like “American Brave” are cultural appropriation — in other words, why they exploit elements of a culture and why that’s not cool. That way, maybe people will wear something that isn’t offensive on Halloween. Members like you already convinced retailers to stop selling a transphobic costume. Keep it up so they’ll take these offensive costumes down!

The gist is simple—so simple in fact that if it weren’t for the promise of a $3,000 scholarship just by signing up for the campaign, you wouldn’t need DoSomething to do it. Simply find an offensive Halloween costume on Amazon.com (they list two with a Native American focus), and leave a 1-star review with a comment. DoSomething even offers pre-written snarky text to copy-paste:

“I thought wearing this costume would boil an entire culture down to a racist stereotype. And I was right: Turns out, I was representing the culture in a super inaccurate and unflattering way! We want this costume taken down!” 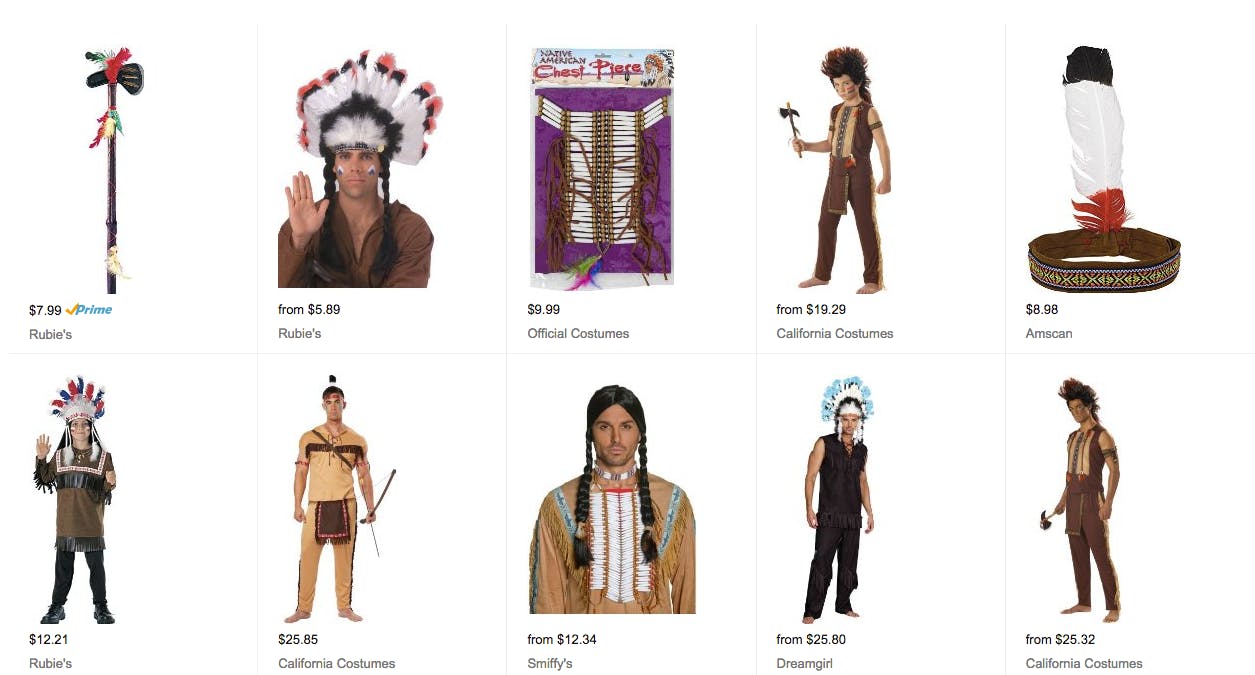 But will this DoSomething campaign actually “do something”? It’s hard to say. The campaign is working in the sense that negative reviews dominate certain costumes: 88 percent of the reviews for a beard and turban combo and 78 percent of the “Pochahottie” reviews are 1-star, with many of them the exact text from DoSomething. One intrepid reviewer even used all three versions of the boilerplate. 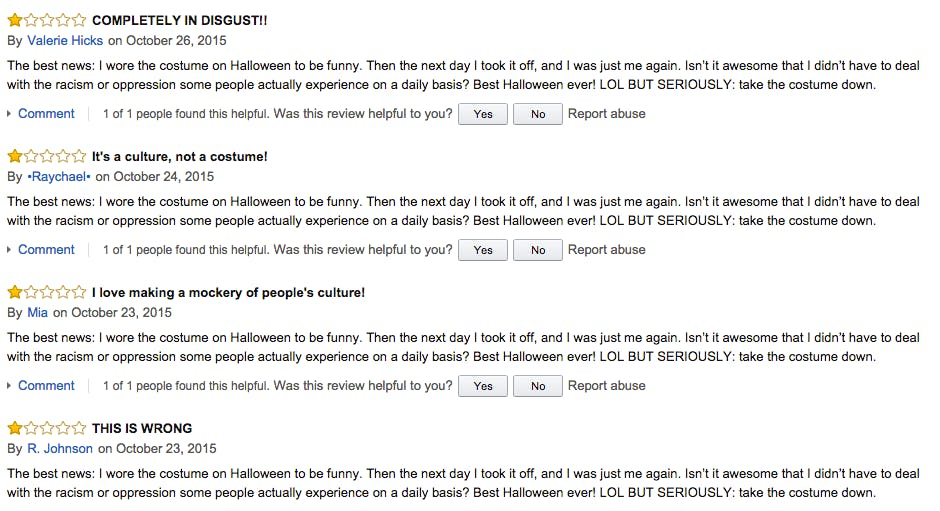 However, it is too early to tell whether such the campaign will be successful, or even what a metric for success might be. Given that offensive Halloween costumes appear every year, one wonders if people who wear these  costumes in the first place will be deterred by sarcastic reviews—not to mention that many probably would take “Wow! I bought this costume last year and LOVED IT!” at face value. Also, Amazon just filed a lawsuit to stop people from leaving phony reviews, so the campaign could theoretically get its organizers in trouble.

Just a reminder that if you’re using another culture’s traditional clothing or imagery as a costume, just don’t. Just go as Left Shark.

Update 5:13pm CT, Oct. 27: DoSomething has issued a statement to the Daily Dot:

DoSomething.org members care about discrimination and 1 Star for Hate is a way for young people to take action on cultural appropriation.

By leaving negative reviews, DoSomething.org members are expressing their frustration about microaggressions and their actions have led to real change.