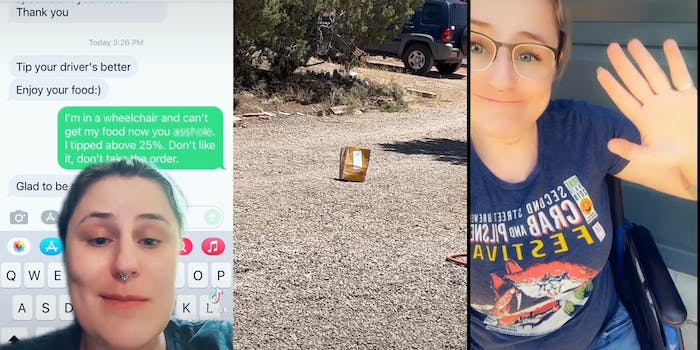 'I’m in a wheelchair and can’t get my food now you a**hole.'

A wheelchair user has gone viral after alleging that a Grubhub delivery person spitefully left her order in a place where she couldn’t get it after they were dissatisfied with her 26% tip.

The video, posted by user Hunter (@lizardqween), shows her explaining the situation before showing the place where the driver left it, which was halfway down a gravel driveway.

Hunter’s TikTok currently has over 2.8 million views and led to several follow-ups.

“When people talk about disability discrimination, this is kind of what they’re referencing,” Hunter says at the beginning of the video.

In subsequent videos, she clarifies that she meant Grubhub’s alleged initial failure to resolve the problem is what led to her classifying it as discrimination, not the delivery itself, as she notes that the driver had no way of knowing she was a wheelchair user.

“Yesterday I ordered some food from Grubhub, and when my food was delivered, I received this message from my driver,” she says in the video.

The message, according to a screenshot in the TikTok, reads, “Tip your driver’s better. Enjoy your food:)”

“Unfortunately, I had to respond with this message,” she shares.

Her response to the driver stated, “I’m in a wheelchair and can’t get my food now you asshole. I tipped above 25%. Don’t like it, don’t take the order.”

She then says that the driver had left her food in the middle of her gravel driveway owing to the tip. As she cannot access the driveway, she claims she had to wait an hour for her caregiver to come home so that she could eat.

“When I approached Grubhub about the issue, they decided it wasn’t really that big of a problem and didn’t do a whole lot,” she says.

In subsequent videos, she shares developments to her story.

The first interaction with Grubhub shows her specific complaint and Grubhub’s resolution, which was a 15% coupon on another Grubhub order.

Hunter also clarified that her mission was not about money, but rather seeking resolution for her and other wheelchair users who use the service.

After hearing that Grubhub was more responsive on Twitter, she says she tried again through Twitter direct messages.

Later, after the viral videos and many TikTokers messaging Grubhub on her behalf, the company responded to her in greater detail.

“I did receive an email and a phone call and a text from Grubhub along with a loose apology and a $100 gift card. Which, to me, is ironic, because I think it should be inherently obvious I’m never going to use Grubhub again,” she explains.

In another video, she says she will not use Grubhub again because she can not be sure the same driver would not pick up the order.

However, Grubhub later posted on Twitter clarifying that the driver had “ended the driver’s contract.”

“We’ve heard all your concerns and want you to know we take this matter very seriously. Grubhub has a zero-tolerance policy for discriminatory behavior from our delivery partners and after investigating this incident have ended the driver’s contract,” it said in response to a tweet by Hunter on the matter.

While Hunter says she won’t be ordering from Grubhub again anytime soon, she said she hopes to put their $100 gift card to good use.

“I’m looking into how to make this money go to use so I will definitely look at that, along with maybe getting someone else some food,” she said in comments.

The Daily Dot reached out to Hunter via Instagram direct message and TikTok comment as well as to Grubhub via email.