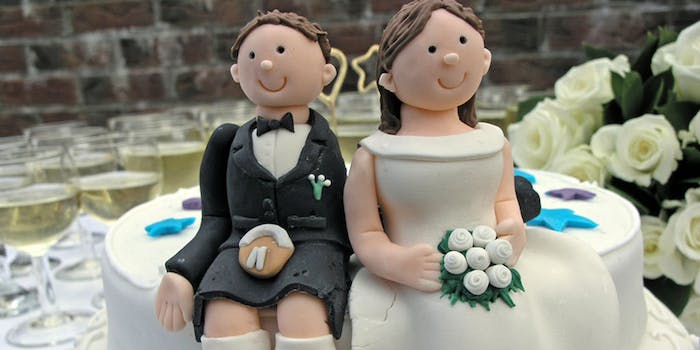 'Don't prank a bride on her wedding day,' and other things that should not need to be said.

Some weddings are more memorable than others. Two waiters got into a fight and dropped the cake during the reception takes the cake—pun intended.

A video from the UK which is making the rounds appears to depict two arguing waiters dropping a wedding cake in spectacular fashion. As the scene plays out, the scenario actually appears to be a prank on the stunned bride, much to the amusement of the men around her.

A waiter comes into a full dining room carrying a beautiful four-tiered cake. He moves out of frame, but as he moves back into frame, there’s the sound of something breaking, and an irate man also in a waiter’s uniform springs after him to shove him.

Guests laugh uncomfortably, the way you do when something wonderful has been completely ruined and the tension of the situation has to be released some how. The distraught looking bride gets up to investigate.

There’s a jump in the action, a distinct cut in the video sequence. When action resumes, the bride, Laura, is playfully slapping at her new husband Joe Cox, who hugs her while the emcee apologizes for the prank and the crowd screams. At least some of them do. There’s still some very uncomfortable faces in the crowd, though everyone seems to be relieved.

The (mean—there, we said it) prank was planned beforehand by the groom with James Entertainment, the UK’s GazetteLive reports. Of course there’s no telling what happened in the trimmed video, but the groom told Buzzfeed that, “She was gobsmacked and thought her day was ruined, [and our] guests were stunned.”

For some reason, it does not make us feel much better to know the prank cake was just a replica (which cost about $520) and the real cake was delivered safely. Pranking a bride on her wedding day—especially if it involves thinking she won’t get any cake!—is just wrong. You just don’t mess with cake.

Apparently, though, the bride got over thinking her day was “ruined.” She claims to have found the prank hilarious. At the very least, it will be a memorable wedding day for everyone involved.