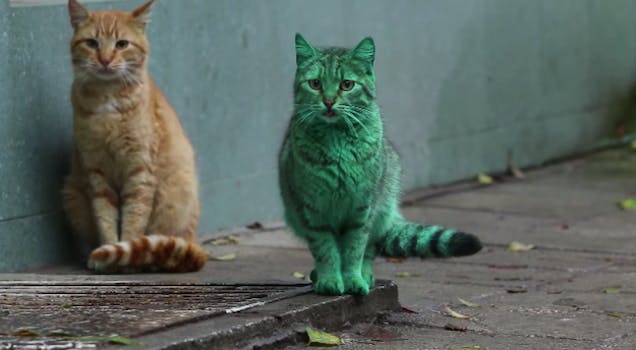 Green cat of Bulgaria is your new favorite Internet cat

Is it easy being green?

The Internet has a new favorite cat. It doesn’t have a cute name or a holiday special. But it is green.

The feline apparently lives in Varna, a seaside resort town in Bulgaria. Rumors abound as to how exactly the cat became green. The video’s description claims, “Because of the assumption that the cat was painted in green by a vandal, a Facebook group named ‘Punishment to the the perpetrator of this criminal act!’ appeared online. But in fact the emerald green cat is this hue reportedly because it usually sleeps on an abandoned heap of synthetic green paint in a garage.”

If the cat does indeed sleep in synthetic paint, that’s pretty hardcore, but it doesn’t necessarily explain how the feline’s color is so perfectly distributed. Just how much paint is this cat sleeping in? And is it easy being green?

People in the village have apparently been trying to catch and bathe the cat for a year, but it’s proven elusive, likely because it has superpowers. It’s unclear if the cat has an owner.

Perhaps this is viral marketing for a new cat-based superhero movie? We can only hope.