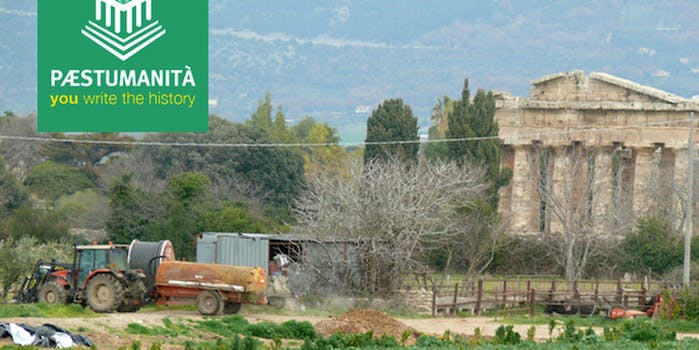 Crowdfunding could save Greek ruins from… ruin

Talk about a real estate investment.

You can buy a little piece of ancient Greek real estate for just $65.

In fact, a group of Italian preservationists would be crazy excited if you did. They’ve raised only about $2,000 toward the $70,000 they need to purchase land in southern Italy that contains the ruins of the ancient city of Paestum.

While Paestum, built by the Greeks in the seventh century B.C., was named a World Heritage Site by the United Nations Educational, Scientific, and Cultural Organization in 1998, only 25 of the 95 acres within the ancient city’s walls have been secured as a public land by Italy’s Ministry of Cultural Heritage.

The rest of the land is privately owned and is being used mostly for farming. The Italian environmental group Legambiente Onlus finds that to be problematic because it prevents public enjoyment, study, and preservation of the historic site.

But what has really raised the ire of the group is that heavy farming equipment is actively damaging yet-to-be unearthed structures that once belonged to Paestum.

Figuring that the site is an important part of world history, Legambiente Onlus launched a worldwide social fundraising campaign so it can buy and protect the land.

“The most important aspect is the community involvement — a community which is certainly international, because the Paestum site is on the UNESCO List, so we can request help world wide,” Valentina Del Pizzo, spokeswoman for the environmental group, told Euronews.

Legambiente Onlus created a website dedicated to the effort and has been diligently tweeting about the campaign, but it seems to have yet to gain a foothold in the social sphere. Their Indiegogo campaign launched on Dec. 5 is nowhere near the funding goal that would allow them to make their first property purchase.

But, with 21 days to go and perks like paintings from Italian designer/architect Riccardo Dalisi on the table for big donors, the project could yet avoid the fate of becoming a Greek tragedy.

H/T Euronews | Photo via Save Paestum/Indiegogo