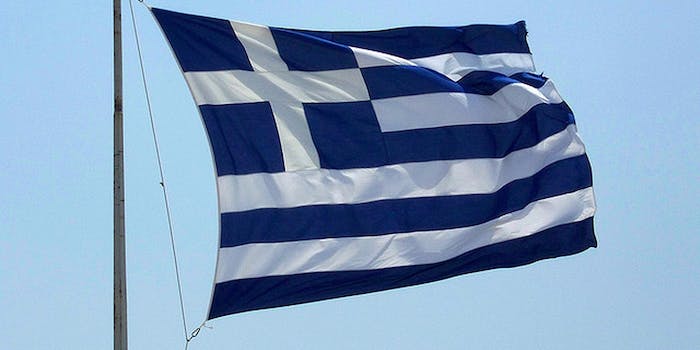 The page mocked Elder Paisios, a Greek monk who died in 1994.

In Greece, making fun of a dead man on Facebook is grounds for arrest.

Greek authorities announced Monday via a press release that they had arrested and charged a 27-year-old man with blasphemy for creating a Facebook page mocking Elder Paisios, a famous Greek monk who died in 1994.

Paisios has a cult-like following in Greece, largely because of his alleged prophetic powers. He is credited for predicting the fall of the Soviet Union as well as the current Greek economic crisis. The page, which has since been disabled, mockingly called the monk “Geron Pastitsios,” a play on words that refers to a Greek baked pasta dish.

According to the press release, the arrest stemmed from “thousands of e-complaints coming from residents of different countries around the world.”

A more popular theory, propagated by Twitter users using the #freeGeronPastitsios hashtag, is that Golden Dawn, a neo-Nazi party in Greece, took issue with the satirical page.

Article 199 of the Greek Penal code states that anyone who “publicly and maliciously and by any means blasphemes the Eastern Orthodox Church of Christ” is subject to imprisonment for no more than two years.

According to The Jakarta Globe, the unnamed detainee wrote a post on the page in July detailing how he had fooled multiple religious and nationalist blogs into republishing a fictitious account of Elder Paisios miraculously saving a drug addict as the latter lay dying in a hospital.

A petition asking for the release began circulating on the popular news site Reddit. From the petition:

“If Greece wishes to be a part of the modern globalized world it must adhere to the standards and principles of a free nation where its people have the right to have a free and open dialogue about all subjects.”

As of this writing, 5,002 people have signed the petition.