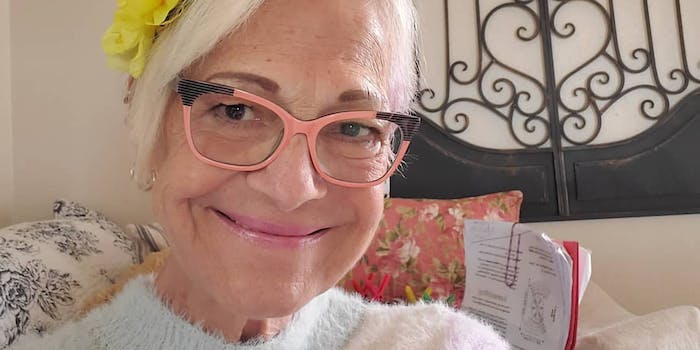 'You have warmed my heart every time you post.'

TikTok user Grandma YoYo, who accumulated over 1 million followers on the app, rose to fame posting videos that follow her journey navigating inoperable lung cancer. Fans are now supporting the TikTok star so she can rest at home in the final days of her life.

The 71-year-old, whose real name is Linda Roper, posted her first TikTok video over a year ago and now has over millions of likes on her videos. On Feb. 6, she posted a video where she disclosed that she entered another stage of cancer and promised to “keep in touch until the very end.”

“You’ve walked with me on this journey,” Roper said. “And it’s getting smaller now.”

Roper is bedridden and posts updates through her two children, Crystal Bleu Dvorak and Steven King.

Dvorak organized a GoFundMe for her mother and raised nearly $15,000 from 800 donors. She said that the proceeds will be used to hire additional nursing assistance.

“Grandma YoYo’s dying wish is to be able to stay at home at this time,” Dvorak wrote.

Fans are also sending Roper encouraging letters and gifts, which her son posts on her TikTok. In a recent video, King read a letter from a fan named Alex who thanked Roper for being a “light to everyone.”

“You have warmed my heart every time you post. You have managed to be so happy and positive in all you share. It’s so inspiring,” Alex wrote.

Dvorak said she finds comfort in the letters and gifts fans have sent to her mother, CNN reports.

“It’s a strange journey,” Dvorak told CNN. “Somewhere in this process, even though her health really did turn pretty quickly, I don’t feel alone.”

Roper said she intends to maintain her TikTok presence because it gives her an outlet to express herself, per CNN. Some of her fans are also expressing support and gratitude on Twitter.

Roper and Dvorak did not immediately respond to the Daily Dot’s requests for comment.