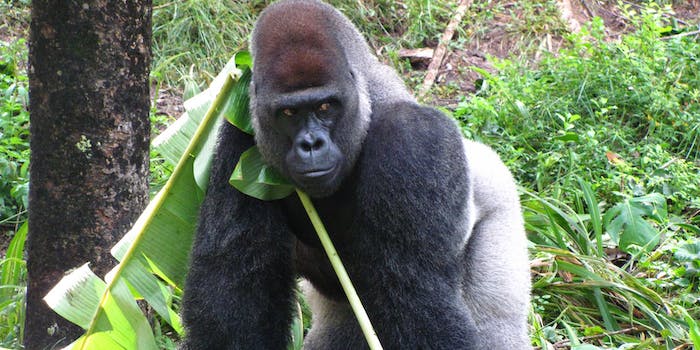 This gorilla is the reason glass exists at zoos

Lesson learned: Don't pound on your chest at a gorilla exhibit.

Visitors at the Henry Doorly Zoo in Omaha, Nebraska got quite a shock when one of the gorillas suddenly came running toward the glass—and not in a friendly way.

When one young visitor pounded her chest, the silverback gorilla charged over to the glass that separates visitors from the animals and angrily slammed his whole body weight against it. The glass did not shatter, thankfully, but a large crack did form.

The YouTube video made it to Reddit’s r/videos, where redditors shared their thoughts on why, exactly, this happened.

“I found it pretty interesting that the gorilla appeared to purposely avoid eye contact while running at the glass until the very last second. I’m sure that means something, but I don’t speak gorilla,” cowpen said.

Redditor GroundhogNight shared a similar experience from a visit to the Cleveland Zoo during his childhood.

“When I was 10, I did this. Gorilla exhibit at the Cleveland Zoo. 4th grade field trip.

A gorilla had been moving along the glass making faces at the kids, very positive and happy. So I beat my chest because it was the only gorilla language I knew. He stops being happy. Pounds his chest. Pounds the glass. Runs all around the enclosure yelling and flipping shit. Then sits with his back to everyone. Everyone’s jaw is dropped. They look at me. I gulp.

My mom was an animal behaviorist and chaperoning the trip. She tells me I have to apologize. So I tap on the glass.

The gorilla knuckles his way to me and is staring me the fuck down. Mom tells me to lower my head and hold out my hand, palm up. I do. After a few seconds, the gorilla taps the glass and starts smiling-laughing. Resumes playing with everyone!

That was my first and only conversation with a gorilla. 9/10.”

Hopefully at the next exhibit, these visitors just kept to themselves.