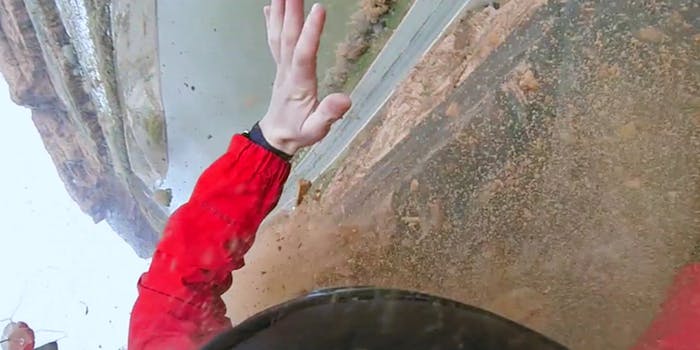 This BASE jumper’s brush with death is actually quite beautiful

GoPro has opened up previously unseen worlds: We can see bikers dueling with rams, eagles gliding over mountains. Now add men crashing into cliffs to that list.

Before BASE jumping in Moab, Utah, Thayer Healey strapped a GoPro onto his helmet to catch the action. We see him look down off the steep cliff, overlooking a highway running alongside a lake. He jumps, and the action slows down, showing all the majestic scenes in a 360-degree view: The blue sky, the slate and rust striations of the cliff, the greenish-grey mirror of the lake. And then, Healey crashes into the cliff, pieces of it falling with him. He extends his hand, trying to stabilize, though this action becomes almost romantic; he slides his hand down the surface like he’s caressing someone’s face.

As grand as the video appears, thanks in part to editing and the addition of a soundtrack, Healey did sustain a fractured vertebra; a sprained back, wrist, and hand; and stitches to his eye and chin. According to his Facebook page, he was released from the hospital the day after the accident, and seems to be recovering. A couple views of this video, however, and it’s clear things could have ended much differently.