“This unfortunate girl has so much extra weight that no diet can help her,” the description read.

“This unfortunate girl has so much extra weight that no diet can help her,” the description read. “In our clinic she can go through a surgery called liposuction that will make her slim and beautiful.” The game was apparently marketed to players ages nine and up, who were encouraged to cut open Barbie and give her the plastic surgery she so desperately needs. 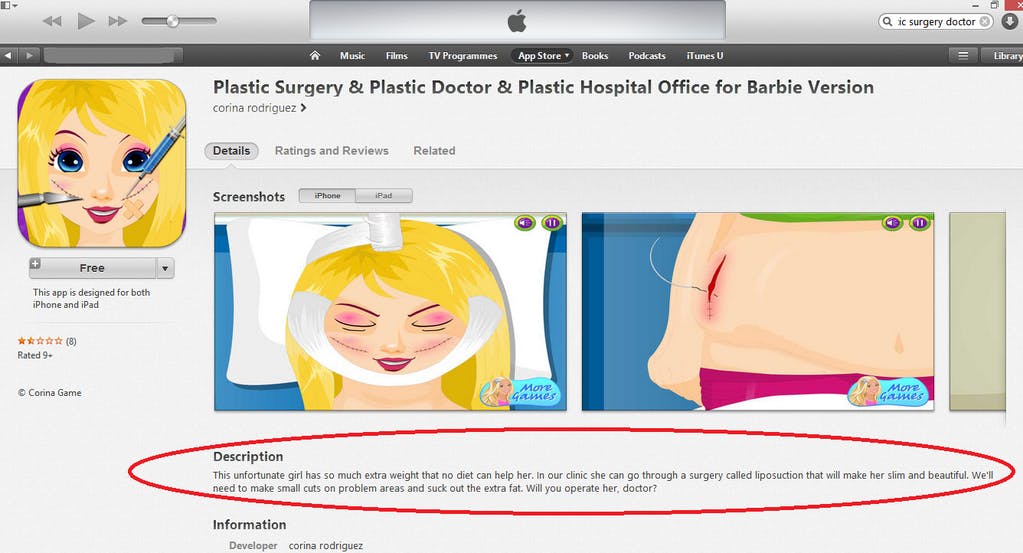 Understandably, there was outrage on Twitter about the game’s message and appropriateness, even for adults. In the span of a few hours, iTunes decided to pull the app from its store.

Turns out Google Play also has a plastic surgery app aimed at women, simply called “Plastic Surgery,” with the same premise of surgery and liposuction as a “game.” That app has also disappeared. The iTunes Barbie app cautioned users that the game includes “infrequent/mild realistic violence.” The Google Play app blamed the weight issues of a woman named “Barbara” on the fact that she “likes to eat a lot of burgers and chocolates.”

The fact that “problem areas” and diets are being marketed to kids as a game is extremely unprofessional on the part of high-profile companies like Apple and Google, and perpetuates the idea that body-shaming young girls is OK, in a time when that happens plenty already. But the fact that “mild” violence against a woman was referenced as part of the game is even more troubling.

There wasn’t an official statement from either company. It’s unclear whether the Barbie game was removed from Apple’s store because of its subject matter or because of a copyright claim.