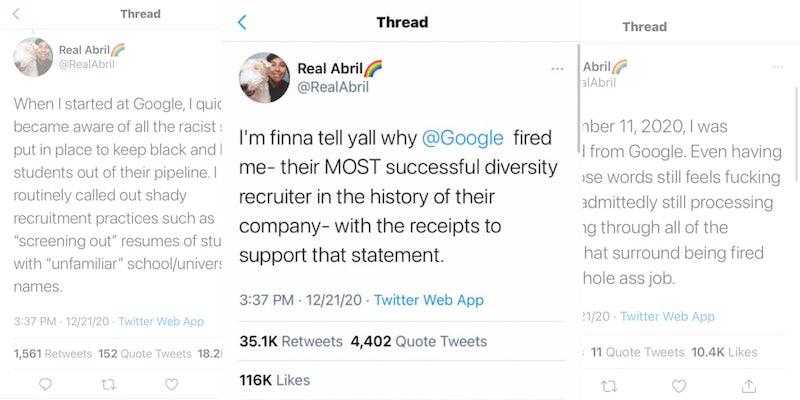 April Christina Curley says her Baltimore accident was described by management as a 'disability.'

An Ex-Google employee is going viral on Twitter to open up about her experience of being fired from the tech giant, according to multiple reports.

The employee, April Christina Curley, is a queer Black woman who was hired in 2014 as a diversity recruiter to “fundamentally shift the relationship (or lack thereof) that Google had with Historically Black Colleges and Universities.”

In a Monday thread that has garnered over 118,000 likes and 39,000 retweets, Curley wrote about her experience there leading up to her firing on Sept. 11 and accused the company of using racist recruiting practices.

“Before my role existed, Google had NEVER, and I mean fucking NEVER hired an HBCU student into a tech role,” Curley stated in her thread.

Curley said that her role helped boost Google’s hiring of Black engineers from HBCUs “by over 300%,” claiming that the reason Google never thought of hiring from these schools is that “they didn’t believe talent existed at these institutions.”

Further in the thread, Curley opens up about racist and exclusionary hiring practices allegedly used “to keep Black and Brown students out of their pipeline,” including practices of “screening out” resumes of students from unfamiliar colleges and universities and questioning the applicant’s quality of education during interviews.

“Every single day for six years, I fought tirelessly to provide Black and Brown students the opportunity (that they were qualified for and rightly deserved) to launch a career in tech,” Curley wrote.

Curley further stated that her steadfast advocacy for the recruitment of Black and brown students led her to receive “active abuse and retaliation from several managers,” including other Black women at the company.

In addition to alleged performance-related retaliation, Curley opened up about invasive and microaggressive comments from her co-workers. Her last manager, whom she says ultimately made the decision to fire her, “had his ego bruised from jump” when she refused to discuss her sexuality with him. Her skip-level manager, who Curley said was a white woman, reportedly said that Curley’s heavy Baltimore accent “was a disability that I should disclose when meeting with folks internally.”

Curley ended the Twitter thread condemning the company, stating that “they don’t want Black talent” and that she’ll “tweet more as I find the energy to do so.”

Google’s problem with recruiting Black and brown talent isn’t unique—according to a Women in the Workplace study conducted in 2018, researchers found that out of the 279 companies and 64,000 people they surveyed, only 22% see racial diversity as a company priority, speaking to a larger problem of racial underrepresentation and discrimination in the corporate sector.

We’ve reached out to Curley and Google.

Update 7:11am CT, Dec. 23: A Google spokesperson tells the Daily Dot: “We have a large team of recruiters who work incredibly hard to increase the hiring of Black+ and other underrepresented talent at Google, including a dedicated team that partners and strengthens our relationships with HBCUs. This work is critical – in 2019 we welcomed graduates from 19 HBCUs and over the past decade, we’ve expanded our recruiting efforts to more than 800 schools. At the same time, we are absolutely committed to maintaining an inclusive and supportive workplace. We don’t agree with the way April describes her termination, but it’s not appropriate for us to provide a commentary about her claims.”

Google points to a partnership with the Thurgood Marshall College Fund that brings company training to career centers at HBCUs to show that these institutions remain on its radar. Google adds that it’s recently announced a series of “commitments to improve racial equality” and that it’s also launched a site outlining the progress of those goals, and points to its diversity report as a sign that its updated hiring practices show improving results.