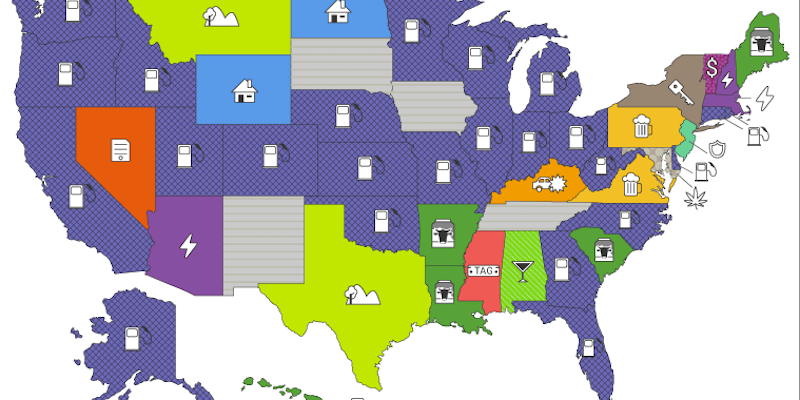 You’re not the only one going nuts about about the price of beer in Virginia.

Thanks to the powers of predictive search, what most people found to be the most questionably expensive resource in each state has been revealed. DIY firm Improvenet has released a map of what Google autocomplete returns for “Why is (…) so expensive in X state?”

From housing to gas to liquor, the map looks at which states to avoid if you’re trying to save money on a specific commodity: 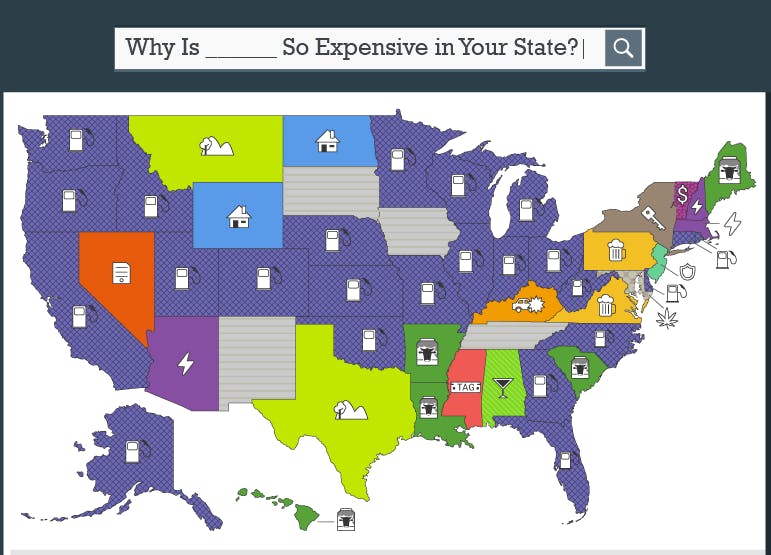 The graph yields inconclusive data for four states: South Dakota, Iowa, Tennessee, and New Mexico. That’s no surprise. All four states rank low as far as cost of living; Tennessee and Iowa are among the 10 most inexpensive states to live in the nation.

A closer look at the map’s findings can reveal some interesting insights:

Virginia has some of the lowest excise taxes on beer in the country, at only $0.26 per gallon. But a growing Virginia craft beer industry may be the culprit here; the low yield of the state’s breweries equals costlier local brews. But still, many in neighboring Maryland and Washington, D.C., skip state lines for the cheaper beer in Virginia.

Being a beer geek in Pennsylvania must be tough. The state whose motto should be changed to “Live Free or Die Hard” is notorious for its prohibitive laws on both beer and hard liquor. You can only buy beer from bottle shops, taverns or a beer distributer in Pennsylvania, where you only have the option of buying a case or keg. No single bottles. No six-packs.

Why is car insurance so expensive in the Bluegrass state? Not only is Kentucky the third most expensive state in the nation for car insurance, Louisville is the eighth most expensive city. Local news outlet WDRB reported that the pricey auto insurance rates are due to Kentucky being a “no fault” state for car accident liability.

“If you’re in a vehicle accident in Kentucky, your insurance picks up the first $10,000 of your medical bills whether you were at fault or not,” explained Louisville Kentucky Insurance agent David Cronin to WDRB.

Nevada is ranked the fifth most expensive state for car owners in the nation, and a recent 2009 tax hike increased  of registering your car in the state. The cost of registering a $25,000 car is $383 dollars in Reno, compared to $195 in Oregon, according to the Las Vegas Review-Journal.

License plates will set you back in the Magnolia State. According to Mississippi Watchdog, the culprit is a state legislature controlled “ad valorem” property tax, resulting in tag costs of $400 or more for some residents. The pricey tags has led to car tag fraud becoming a regular occurrence in the state.

Living in the Green Mountain State may have its charms, but it comes at a price. Vermont is ranked the 10th most expensive state in America. The small state is almost 75 percent forest and has one of the nation’s tightest housing markets. The average price of a home in Burlington, the largest city, was $485,749 in 2015.

It’s no mystery why Arizona is on the list. The desert state relies heavily on air conditioning, which makes up a quarter of its total energy consumption, to get through its hot and arid summers. The costs of an Arizonan’s electricity bill can sky-rocket during peak air-conditioning hours, like in the middle of a sweltering summer day.

New Hampshire and Massachusetts residents have the opposite problem. Freezing winters and price volatility in New England’s energy market has led to steep energy bills for residents of both states. According to the U.S. Energy Information Administration, the average cost of electricity delivered to consumers in November 2015 was 18.15 cents a kilowatt-hour in New Hampshire and 18.32 cents a kilowatt-hour in Massachusetts, compared to 15.55 cents in Maine and 14.40 cents in Pennsylvania over the same period.

Insurance is expensive in the Garden State. The state’s health insurance premiums were historically among the highest in the nation, even before the Affordable Care Act.

Due to a high mandatory liability premium, the state has the costliest auto insurance in the nation. There are also more cars and more accidents, so many New Jersey residents buy more coverage than is legally required.

Long gone are the days when cheap land was one of Texas’s draws; the state is losing more rural land than any other state in the nation, according to the Texas Tribune. In fact, the world’s most expensive ranch is located in North Texas. At more than 500,000 acres, the abode fetched a staggering price of $725 million.

From sea to shining sea, pretty much everyone seems to be wondering why the price to pump is so expensive—or why it was in the recent past, at least. Due to a surplus, gas is cheaper than it’s been in years. The average national price of a gallon is $1.70 in February 2016, which is less than half the national price for 2011, 2012, and 2013, according to AAA.

But the nationwide average of gas prices is a misleading snapshot that leaves out the big Western states. For example, the cost of a gallon is $2.36 in California this month, which is still lower than the $2.81 it was last year during the same period. Oil refineries are less concentrated out West, which has contributed to the high cost to transport gas in those states. The high cost to transport gas is also why gas has traditionally been the most expensive in places like Alaska and Hawaii.

San Jose Mercury News attributes California’s expensive gas to a few factors: The Golden State’s gasoline tax of nearly 60 cents a gallon is among the highest in the nation, the blended fuel costs an additional ten cents, and there’s an additional ten cent carbon tax. California also only has roughly a third of the oil refineries now than it had in 1982.

As for the high gas prices in the intermountain West? It’s a mixed bag of supply problems and limited pipelines. Especially in states like Idaho that have no access to crude oil or pipelines, the price to pump is notably high.

Dairy farms rapidly closing in Arkansas throughout the 90s led to a state-wide milk shortage. Most of the milk in Arkansas now comes from out of state.

Milk in Louisiana is also expensive due to a state-mandated price floor. The state lost roughly 80 percent of its dairy farms between 1980 and 2007. The average cost of a gallon of milk is $5.15 in Baton Rouge and $3.76 in Little Rock.

Marijuana was pricey in the nation’s capitol, but a recent legalization has cut the price of recreational marijuana by more than 40 percent.

Spirits are costly in the Yellowhammer state, which imposes a 21.4-cent state tax on liquor. Alabama currently has the fourth highest excise tax on alcohol nationwide.

Why is housing expensive in North Dakota of all places? Blame the oil industry. Rents in Williston, North Dakota, were the highest in the country in 2014, even topping Silicon Valley. But that’s no longer the case in 2016. An influx in oil workers lead to the biggest real estate boom in North Dakota history, which in turn led to a dramatic drop in rental prices. A 3-bedroom rental in Watford City is $1,400 in 2016, compared to $2,500 in 2015.

A shortage of low and moderately priced housing is the culprit in Wyoming.

Update: Language in this story jokingly conveyed that Pennsylvania’s state motto is “Live Free or Die Hard.” The original language has been updated to make this clear. The state’s actual motto is “Virtue, liberty, and independence.”

Correction: Beer can also be purchased to-go, although in smaller quantities, in bottle shops and bars in Pennsylvania.