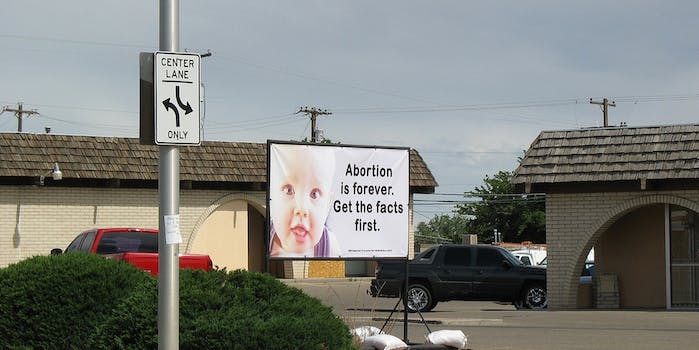 For years, “crisis pregnancy centers,” or CPCs, have exploited women seeking abortions by masquerading as providers, then presenting misleading or false information in order to dissuade them from terminating their pregnancies. In fact, if you do a Google search for “abortion clinic” or “abortion provider,” it’s likely that at least one of these “crisis pregnancy centers” will pop up, despite the fact that they do not provide abortions and, more often than not, are not licensed to provide medical services.

Thanks to a campaign led by NARAL Pro-Choice America, however, that might change. The non-profit organization has convinced Google to remove misleading advertising for “crisis pregnancy centers” after arguing that such ads violate the search engine’s policy against featuring “misleading, inaccurate, and deceitful” ads.

Al-Jazeera America reports that NARAL launched its campaign to have the ads removed last February, after writing a letter to Google CEO Larry Page complaining about the misleading advertising tactics of non-profit, anti-choice organizations like Online for Life, which target women seeking abortions with ads directing them to crisis pregnancy centers.

Instead of offering women medical services or counseling, the CPCs often present women with information about alternatives to abortion, as well as inaccurate information about abortion and birth control, such as that abortion leads to an increased risk of breast cancer and infertility.

“We have no qualms with CPCs engaging in paid advertising. However, we are deeply concerned with their false advertising practices,” NARAL wrote in their letter to Page, adding that a recent investigation concluded that 79 percent of Google searches for the term “abortion clinic” yielded an ad for a crisis pregnancy center.

“We know Google places a high priority on making sure advertising on its site is accurate and provides a good user experience,” NARAL wrote.

It seems that Google agreed. On Monday, the search engine removed the ads for “crisis pregnancy centers,” telling Al-Jazeera in an e-mail that the ads violated their guidelines “related to ad relevance, clarity, and accuracy. If we find violations, we’ll take the appropriate actions—including account disablings and blacklists—as quickly as possible.”

Of course, Google’s decision to remove targeted advertising for CPCs doesn’t mean that they’ll go away entirely, or even be held accountable for their practice. There are thousands of crisis pregnancy centers in the United States, with a 2013  estimate putting the number at 2,500, as opposed to about 1,800 abortion providers. Many of these centers are affiliated with right-wing Christian non-profit organizations like Care Net and Heartbeat International, some of which have received millions of dollars of federal and state grants.

But NARAL president Ilyse Hogue says at the very least, Google’s decision to remove targeted ads for CPCs sets a precedent for other leading search engines to follow suit.

“Anyone looking for abortion services should be able to depend on their search engine to provide them with accurate resources,” she said. “Anything less is aiding and abetting ideologically driven groups with a calculated campaign to lie to and shame women making one of the most important decisions of our lives.”