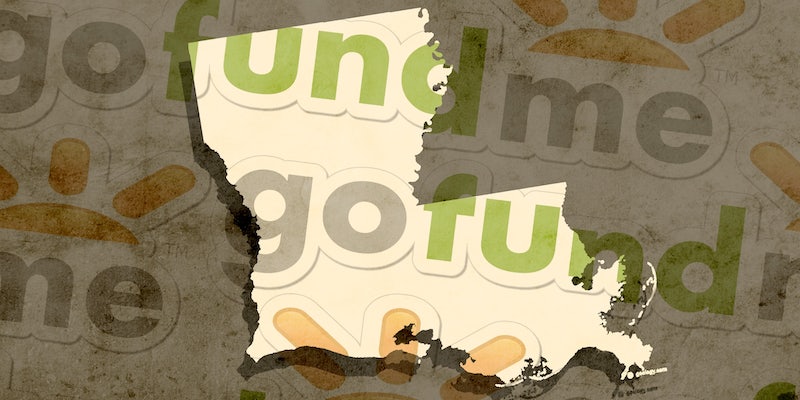 Here’s how you can help the Louisiana flood victims

Flood insurance doesn't pay for everything.

Southern Louisiana is expecting historic levels of flooding. Over 20,000 people have been rescued from their homes, cars have been abandoned on Interstate 12, thousands of people are seeking shelter in the Baton Rouge River Center, and at least six people have died. Donations to places like Red Cross, the Orleans Parish Sheriff’s Office, local churches, and local animal shelters are always appreciated, but various fundraisers for individual victims of the flooding have been set up around the internet. Here are just some of you can donate.

The sorority hopes to collect enough money to donate $500 to each family affected by flooding. “This cause is special to the ladies of Rho Epsilon because Baton Rouge is our home and many of our friends and community members have become victims of this flood,” they write. “We want to go beyond our words of encouragement and make a bigger impact. We too are students and are members of families and are sharing in their struggle.”

This clothing store in New Iberia, Louisiana, has been around since 1916, and according to the GoFundMe got rid of flood insurance in order to keep the business going. Now its owners are suffering for that. “The total loss from the flood is over $100k. All money donated is going to Gulotta’s Inc. to help them rebuild their 100 year family business,” writes organizer Sammy Holbrook.

According to Craig’s friend, Travis Roberts, the flood took the Craigs’ home. This video of the flooding beginning shows the damage, before Craig and his family evacuated for a shelter on a boat. “I left for work at 6am and the water wasn’t near us. In an hour and a half it was ankle deep in my house and knee deep outside,” wrote Craig. He returned to his house to get his family, and now says, “My parents house is dry, but every road in and out of this town is flooded in. Once the flood waters go down I can get in to town and see what can be salvaged.”

Marcie Elizabeth Frazier writes that the water in her family’s home in Baton Rouge is knee-deep, and that both of their cars have been flooded. They have flood insurance, but she writes “we are teachers, who had to live paycheck to paycheck prior to this disaster.  We really have no idea how we are going to afford an additional living space and continue to make payments on the swamp and two sunken cars that are parked in the swamp.”

Leigh Pourciau Topp is raising money for her grandparents, who have lost nearly everything in the home they built. According to Topp, their insurance covers the home but nothing inside of it, and their retirement income doesn’t leave much room for rent or replacing all their furniture.

Local soccer coach Casey Friend had been building his home for the past year, and is now submerged in three feet of water. One of the members of his team started the GoFundMe on his behalf.

Ashli Stockton started this GoFundMe for her mother, who was rescued with her brother from their home. “Because my brother is in a wheelchair and requires special care, the circumstances were critical,” Stockton writes. Tindle is the executive director of Families Helping Families of Greater Baton Rouge, “a family directed resource center for individuals with disabilities and their families.”