How a bunch of girls hacked Tinder

'Want to be friends and go dancing?'

I was bored. I was on Tinder. I didn’t necessarily want to hook up, but I definitely wanted to hang out.

That’s when I swiped right on this profile picture: 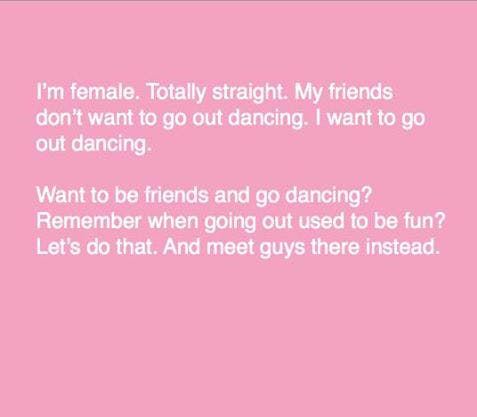 This was my introduction to Girl Crew. The main site sends you to the Facebook group for your city.

At first I was just curious. I’d been looking for a way to kill time and rubbernecking on Facebook had never failed me before. I figured the group was going to be mostly sorority types trading makeup tips, but the meetups ran the gamut of activities from rugby to brunch.

I decided to go for a some day drinking and bacon, figuring even if the ladies were lame I could still enjoy eggs drowned in Cholula. With managed expectations of what a Sunday morning embroiled in a brood of clucking hens would be like, I headed down to the auspiciously named East Village eatery the Brazen Fox.

The girl who’d pitched the brunch made a reservation for 15. Seven of us showed.

We were all between 24 and 34, and ranged from beach bum to FBI agent. But we all use Tinder.

There was a real first date vibe in the air, but it was the best first date I’d ever been on: There’s no expectation for sex, the stakes are lower, and you’re free to be yourself. Plus, if it doesn’t go well you never have to see these people again, so you don’t have anything to lose by letting your guard down and telling it like it is.

Most of us spend the bulk of our days with people like us. Doctors know doctors, teachers know teachers, heroin addicts know heroin addicts. What was so special about my Girl Crew brunch was the reminder that people are all just people. Our experiences, while unique, are also common and sharing them gave me a real sense of humanity.

There was a real first date vibe in the air, but it was the best first date I’d ever been on.

A Southern belle told us that where she’s from, everyone is expected to be engaged right out of college then have kids right away. “You go to Applebee’s and everyone from high school is there, and everyone feels sorry for you. But I’m married to New York.” She added, “I’m married to making it in New York!”

We talked about what it’s like being a straight woman in New York and about the kinds of guys you meet. One thing is for sure: There are a lot of low cards in the Tinder deck—and none of us want a date with the guy who “took an Ambien two minutes after he came” and left his lover to lay awake in a room without working lights in an apartment full of scowling roommates who made the living room (and therefore bathroom) the little New England town from The Scarlet Letter.

Eager to find out more and wanting to share my experience with as many people as possible, I contacted the original Girl Crewer, Elva Carri, to learn more.

Tinder’s Girl Crew profile started with the aforementioned photo—born one Friday night when Carri, who lives in Dublin, wanted to go out dancing but none of her friends did. Finding it harder to make new friends as she aged, she and her sister had the idea to register as a male seeking a female so chicks would see her profile picture pitch in the course of their regular swiping.

Her first outing was the following night. “I think all of us were nervous,” Carri told me. “But then we got to chatting and within five or 10 minutes it just felt really normal and fun, like we’d all been friends for ages.”

Over the next couple of months, Girl Crew exploded. After seeing real friendships forming in the Dublin home base, Carri decided to expand. Girl Crew now has a home in 40 cities in Ireland, the U.K., the U.S., Canada, Australia, New Zealand, Germany, Belgium, Hong Kong, and Singapore.

“It’s still fun and that makes me want to keep it going no matter what.”

Before someone  joins a local Girl Crew Facebook page, they’re asked to agree to some terms. The first is to respect one another, “despite how different we all may be and how different our opinions and feelings on anything.”

And the respect doesn’t end with sisterhood. “If you came across this via Tinder, you might be tempted to share screenshots either out of shock or to see if anyone else has talked to the guy you’re talking to,” the guidelines predict. “But we don’t do that, because we wouldn’t like if they were doing that.”

The group is also private. We’re reminded what that means: No sharing of group info elsewhere and no NSFW pictures, though I’ve seen people use them to advertise classes and rooms for rent.

I’ve been to a couple Girl Grew events (comedy festival, roller derby) now and have generally liked and gotten along with everyone I met on one level or another. And while I haven’t been able to convince any of my friends of analog origin to come to a Girl Crew outing, I’ve made one pal with whom I’ve smoked many a joint with without needing to organize it through Girl Crew. We now arrange our hangouts via text rather than a Facebook group.

“Women are amazing” Carri told me, as if there was ever any doubt. “And that it’s been such a joy to get to witness first hand how amazing people are and how much everyone really wants to treat each other well and become friends and be there for each other socially, personally, professionally. I could never have imagined the sorts of things I’ve seen grow out of it, and it’s a testament to women. And I still love being in it! It’s still fun and that makes me want to keep it going no matter what.”

Girl Crew keeps growing, with women in new cities joining and an app on the way. Girl Crew is doing for platonic relationships what Tinder tries to do for sexual ones. And for once at least, you won’t regret swiping right.