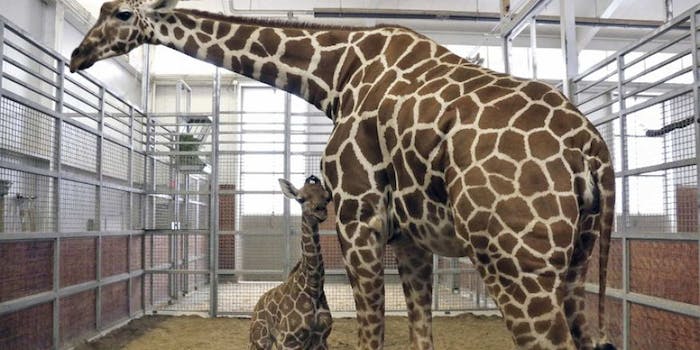 Katie, a giraffe at the Dallas Zoo, is about to pop, and cameras are there to capture the whole thing.

The hottest celebrity baby right now isn’t North West, or Blue Ivy, or even Blake Lively and Ryan Reynolds’ daughter James. It’s the as-yet unnamed spawn of Katie, a giraffe whose labor is being broadcast on livecam at the Dallas Zoo.

For now, the expectant mother is hanging out and eating leaves and stuff, but she could go into labor at any minute. The internet is waiting for the baby’s arrival with bated breath and using the hashtag #GiraffeBirthLive to express their excitement about the impending birth. It seems that people really, really, really want that thing to just pop out already.

Gee Katie, thanks for making me late to work! @DallasZoo – think you can write me a note for missing work? #GiraffeBirthLive

I've been waiting for Katie the Giraffe ALL day. Where you at girl? #GiraffeBirthLive

Is Katie in labor? I have been watching all night long and the kids are going crazy wondering when she will have the baby? #GiraffeBirthLive

Entirely too engrossed in the #GiraffeBirthLive !!! #Katie is way too cute. @DallasZoo is anything happening yet!???

There are eight cameras set up in the zoo’s maternity stall to capture Katie’s labor for Animal Planet. She already has one calf named Jamie, who didn’t receive the same royal treatment when he was born. Sibling rivalry alert!

People can sign up for birth alerts via text message to make sure they don’t miss a moment of the baby coming down the birth cantal. Until the big moment comes, you can watch Katie just chillin’ and generally being adorable.