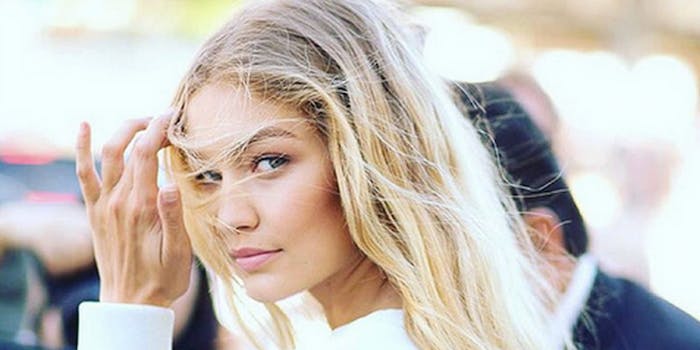 The model is not going down without a fight.

Everyone has haters, but model Gigi Hadid has a few words for hers.

Following an appearance in a Tommy Hilfiger runway event on Sept. 14 in which the model wore swimwear, Hadid said she felt a bit beaten down by negative commenters on social media and their opinions of her body. “…I’m human, and I’m not going to lie, I did let the negativity get to me a little,” the model admitted in a post on Instagram.

But it’s not just Gigi and Tyra that have had to fight their way. Any model with a hint of curve knows the fashion industry can be a formidable space. Model Ruby Roxx, also editor in chief of Beauty Mark Magazine, faced down a network of online harassers who antagonize plus-size models by Photoshopping and reposting thinned versions of their photographs online. She responded with a fiery blog post warning that such carelessness with body image can trigger eating disorders and worse.

Or take Swedish model Agnes Hedengård, who was shunned for being “too big,” despite being runner up for Sweden’s Next Top Model. Rather than compromise her health, Hedengård responded with a little shaming of her own, making a video deriding the “absurd” standards of the industry that practically require women to obsess over a body mass index (BMI) medically regarded as underweight.

Now Hadid is taking on the public fight for body acceptance.