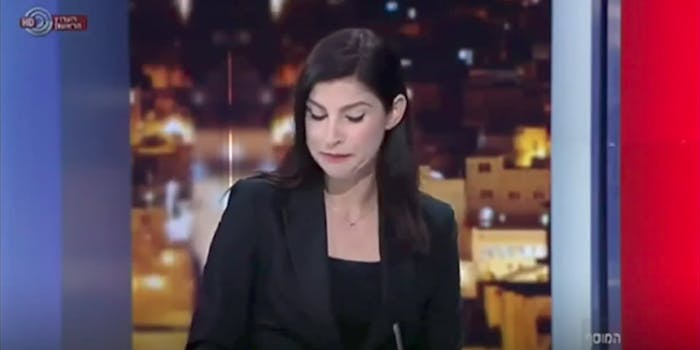 Not the most fun thing to do on live TV.

Though TV anchors often deliver breaking news with strength and professionalism, that doesn’t make the subject matter of their reporting any less heart-wrenching.

That’s especially the case when the matter hits close to home, such as earlier this week when Geula Even, an Israeli TV anchor, delivered breaking news that her network would be shuttering that day.

“We are now getting breaking news, statement in Parliament… Actually, tonight will be our last news program,” Even says on air, before smiling slightly and sniffling, holding back tears. “This is our last edition. So the rest of this program is irrelevant.”

According to the BBC, Even and the staff already knew that the government planned to close their state-run Israel Broadcasting Authority and replace it with a new, smaller station called “Kan,” but had no idea the broadcaster would be shut down that day.

“I do want to thank all the people who worked here all these years,” Even continued in the broadcast, her voice shaking as she describes her years at the station. “And at the end of the day a lot of people are going to lose their jobs. I hope they will find new jobs, and public broadcasting continues to be strong.”