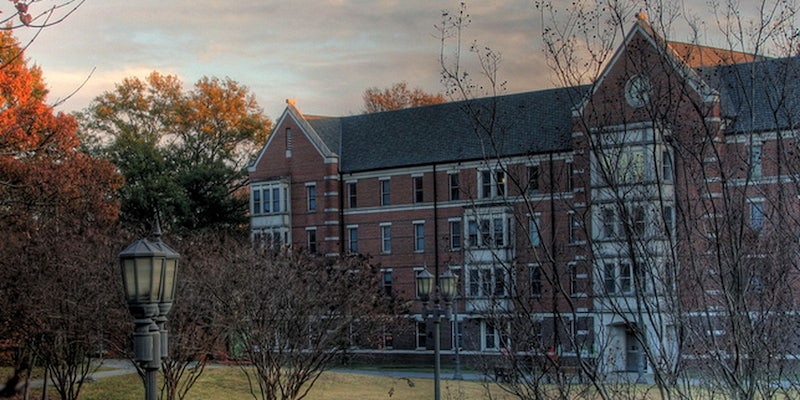 Prepare to get excavated, ladies!

College students are well into the new semester, but it just wouldn’t seem like fall if an ignorant, pro-rape frat boy email didn’t leak onto the Internet. You can thank a fraternity at Georgia Tech for filling that void.

On Monday, bro-news site Total Frat Move claimed it received several tips that an “active” member of Georgia Tech’s Phi Kappa Tau fraternity sent out an instructional email to his brothers, affectionately titled “Luring Your Rapebait,” which provides a step-by-step tutorial for new pledges on how to approach women at parties. The emailer is allegedly Phi Kappa Tau’s social chair, Matthew Peterson, and the email opens like this:

Seems Peterson’s taking a tough-love stance here. He just wants his bros to know the etiquette, right? Be proactive, guys! From there, the email devolves into a very specific fantasy of how the rest of the night should go. Here are a few more tips, like how to dance:

“Grab them on the hips with your 2 hands and then let them grind against your dick. After that slowly alternate between just putting your hand across their stomach, but make sure don’t to go to high (keep it under the boob) or too low (dont try to finger her… yet). After a song, start putting your cheek on the side of her cheek. ALWAYS USE YOUR HANDS OR ARMS TO GUIDE THEIR DANCING in order to maximize your pleasure.”

He then goes on to explain when to move in for a kiss (“putting her hair over her ear” is a surefire sign), and how to “escalate” if the dancefloor has proven promising:

“Try to twist her hips around to face you and dance front to front. FROM THERE THE OPTIONS ARE UNLIMITED! You can make-out with her (tongue on tongue), you can stick your hand up her shirt (not right away though), you can go for a butt grab (outside or inside the shirts), or use your imagination. ALWAYS START WITH THE MAKING OUT!!!! NO RAPING.”

So many mixed signals here! But it is really good advice to not rape a woman on the dancefloor. For the coup de grâce, he leaves his brothers with a handy guide titled “The 7 Es of Hooking Up”:

“1. Encounter (spot a girl or group of girls) 2. Engage (go up and talk to them) 3. Escalate (ask them to dance, or ask them to go up to your room or find a couch, depending on what kind of party) 4. Erection (GET HARD) 5. Excavate (should be self-explanatory) 6. Ejaculate (should also be self explanatory) 7. Expunge (send them out of your room and on their way out when you are finished. IF ANYTHING EVER FAILS, GO GET MORE ALCOHOL.”

So, not only are men being encouraged to “escalate” regardless of whether women are OK with that, they’re also being told to “excavate,” like we’re an archeological dig or a shallow grave. Georgia Tech reps have not yet responded, but an email thread on the alumni list has appeared.

Besides the blatant disregard for the women potentially involved here, and the fact that they’re labeled “rapebait,” this reads like it was written by someone completely unfamiliar with women and sex, yet has narcissism and entitlement down pat. Seems like he’ll make a great pick-up artist one day.