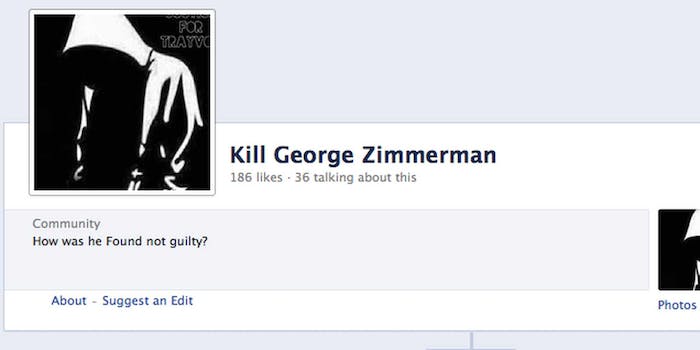 Why won't Facebook remove all pages that urge followers to murder Zimmerman?

Since George Zimmerman was acquitted Saturday night of murdering 17-year-old Trayvon Martin, Facebook has become a hotbed of debate over the outcome

But some have taken their outrage to a startling extreme, urging thousands of followers to murder the 28-year-old former neighborhood watch coordinator.

They’re not exactly subtle about it, either. Facebook removed a many of the pages after furious blowback, but a few remain, including George Zimmerman must DIE and Kill George Zimmerman. These leftovers might be relatively small (not breaking more than a 100 followers each), but the company’s inconsistent response raises serious questions about how Facebook administers its own rules regarding objectionable content.

The lone posting on the Kill George Zimmerman page asks how the court ruling would have differed had the races of the two principles been reversed.

How about this guys? If you follow behind what Mr. Zimmerman did thats cool but all of us don’t need to hear your annoying words. He killed a child! If this was a black guy that killed a white child it would be another story right, The case would be opened and closed. And what if this was your child? Think about it now…

Ironically, most of the nearly 800 comments are from Zimmerman fans trolling Martin supporters.

According to PC Magazine, one Facebook user who demanded the company removed the Kill George Zimmerman page received a quick response from the social network. The page did not violate the company’s community standards, the Facebook rep said, and thus could not be taken down.

Facebook will only remove content when it believes there’s “genuine risk of physical harm, or a direct threat to public safety.” So it’s entirely possible that Facebook, looking at how widespread threats against Zimmerman have become, simply thinks that some of these groups are more about blowing off steam than inciting murder.

But this lax policy is disconcerting for some, who claim a double standard. The company has drawn heat for pulling less controversial pages, like the popular conservative page Uncle Sam’s Misguided Children. Bans like that, and the refusal to shut down pages threatening Zimmerman, have convinced many conservatives that Facebook has it out for them.

Facebook was not immediately available for a response to this article.