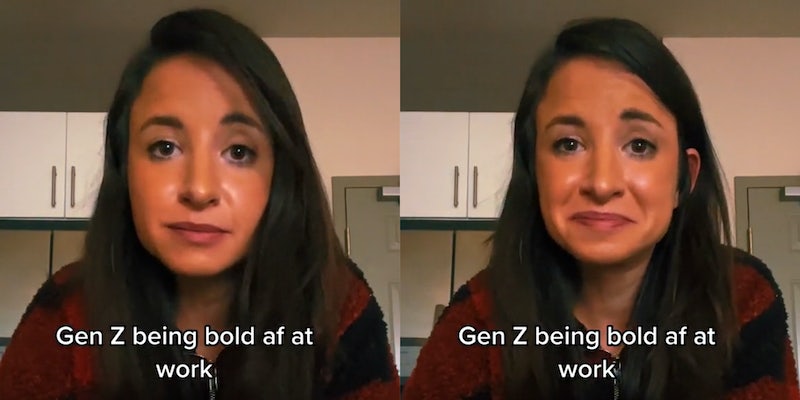 ‘Very bold, but I respect it’: Worker asks for meeting with manager—but then says he feels too ‘depleted’ to take it at that time

'For me, it’s not bold. I think it’s communication. And it’s good.'

A woman on TikTok says she’s both surprised by and respectful of Generation Z workers’ boldness in the workplace.

The TikToker, named Jess (@_coachjesss), often posts about self-optimization and the workplace and has about 13,000 followers on the platform. One of her recent videos shouts out Gen Z workers because of an experience she recently had with one at her job.

“Shout out to Gen Z in the workplace, y’all are bold as fuck,” Jess says in her video.

Jess explains that there is a new Gen-Z person on her team at work, and he asked if he could have a one-on-one meeting with her. She clarifies that she was not the worker’s direct manager, but she agreed to have the meeting. After agreeing to the meeting, she coordinated a time that they were both free and sent the worker a meeting invitation.

In response, the worker told Jess that he had a lot of meetings that day and warned her that he might be feeling “depleted.” He asked if they could meet another day, Jess says.

In a comment on her video, Jess clarified what she meant by the video. “To clarify: I respect the boundary setting [praise emoji] nevertheless, it’s a bold move early in a new job when you’re at the start of your career,” she wrote.

Viewers had a range of reactions to Jess’s story, but some said they didn’t think the Gen Z worker’s request was “bold.” They thought it was appropriate.

“For me it’s not bold. I think it’s communication. And it’s good. I love gen z,” one viewer commented on the video.

A third said, “I know I’m Gen Z when I don’t understand how what he did was bold. Just seems like open communication & setting a good foundation for future honesty.”

Some users commended Gen Z as a whole, claiming that the generation isn’t afraid to stand up for themselves, even in the workplace.

“I’m a millennial, and I think deep down, gen zs are doing things I never had the courage to do but wanted to,” one user said.

“I adore their generation. They are also so open and unashamed about mental health struggles. They’re like gorgeous stars, I love them,” another user wrote.

The Daily Dot reached out to Jess via TikTok comment.