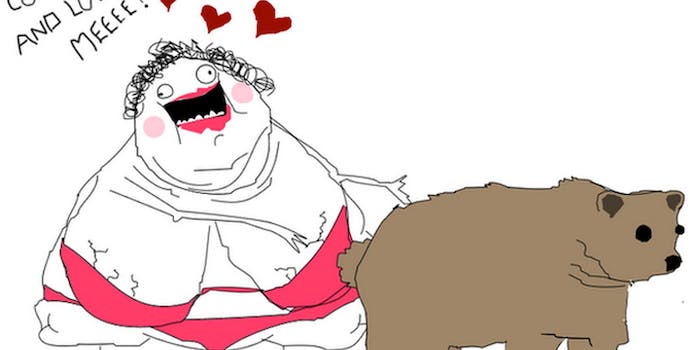 Backed against the wall and facing a mounting army of Internet trolls who will stop at nothing in their quest to ridicule him and digitally vandalize his website and online intellectual property, Internet rights attorney Charles Carreon has decided to sue everybody that he can possibly think to sue.

The gist: Matthew Inman’s agreement with Indiegogo—started as a response to a lawsuit filed last week by FunnyJunk against Inman, demanding that Inman pay $20,000 if he did not remove statements on his site alleging his comics were ‘being stolen, re-hosted, and monetized on FunnyJunk’s website’—is an illegal contract under California law.

As such, Carreon’s 22-page lawsuit demands that all the money raised through Inman’s high profile BearLove Good. Cancer Bad. project—which currently sits at $179,000 with 8 days left in the campaign—go directly to the two charities it’s meant to benefit.

Essentially, Carreon’s suing to take Inman and Indiegogo out of the financial equation.

Referencing the “Supervision of Trustees and Fundraisers for Charitable Purposes Act,” a California act signed in 1959, Carreon argues that the Golden State requires “all charitable organizations to ‘establish and exercise control’ over their own fundraising activities, and over all fundraising activities conducted by others of their benefit.”

Additionally, charitable organizations bound to California state law must approve all written contracts for fundraising on their behalf. This is likely why fellow crowdfunding platform Kickstarter forbids project creators from hosting charitable fundraisers on its site.

Carreon, who has contributed to the campaign and “made his contribution with the intent to benefit the purposes of the NWF and ACS,” referenced the act because he knew that Inman created BearLove Good. Cancer Bad. in haste and that he likely did not jump through all the necessary hoops to ensure that the fundraiser met all state standards and regulations.

There’s a lot of paperwork that one must file in order to launch a commercial fundraiser for charitable purposes in California: you need to register with the California Attorney General’s Registry of Charitable Trusts; file certain disclosures required by the aforementioned registry; and file a number of annual reports pertaining to annual revenue, fees and commissions charged, and where exactly the money raised will go.

Inman has done none of that, and Carreon believes Inman’s “conduct disparages the image of charitable fundraising” and that he’s not equipped to properly run a commercial fundraiser in the state of California. But his lawsuit is not an effort to shut the fundraiser down. Rather, Carreon hopes to hold Inman accountable, to see it through that neither Inman nor Indiegogo make a profit on the fundraiser.

Carreon’s looking for a 50/50 split of dollars raised through Inman’s Indiegogo campaign, and he wants the money to go directly to the two charities.That means that Inman cannot stand to profit from the fundraiser whatsoever, and that Indiegogo has to forgo the nine percent commission fee the company takes from each successful project.

Surely, the NWF and ACS are glad to have been roped into this mess. We now wait with bated breath for Inman to post his next inflammatory drawing on The Oatmeal.