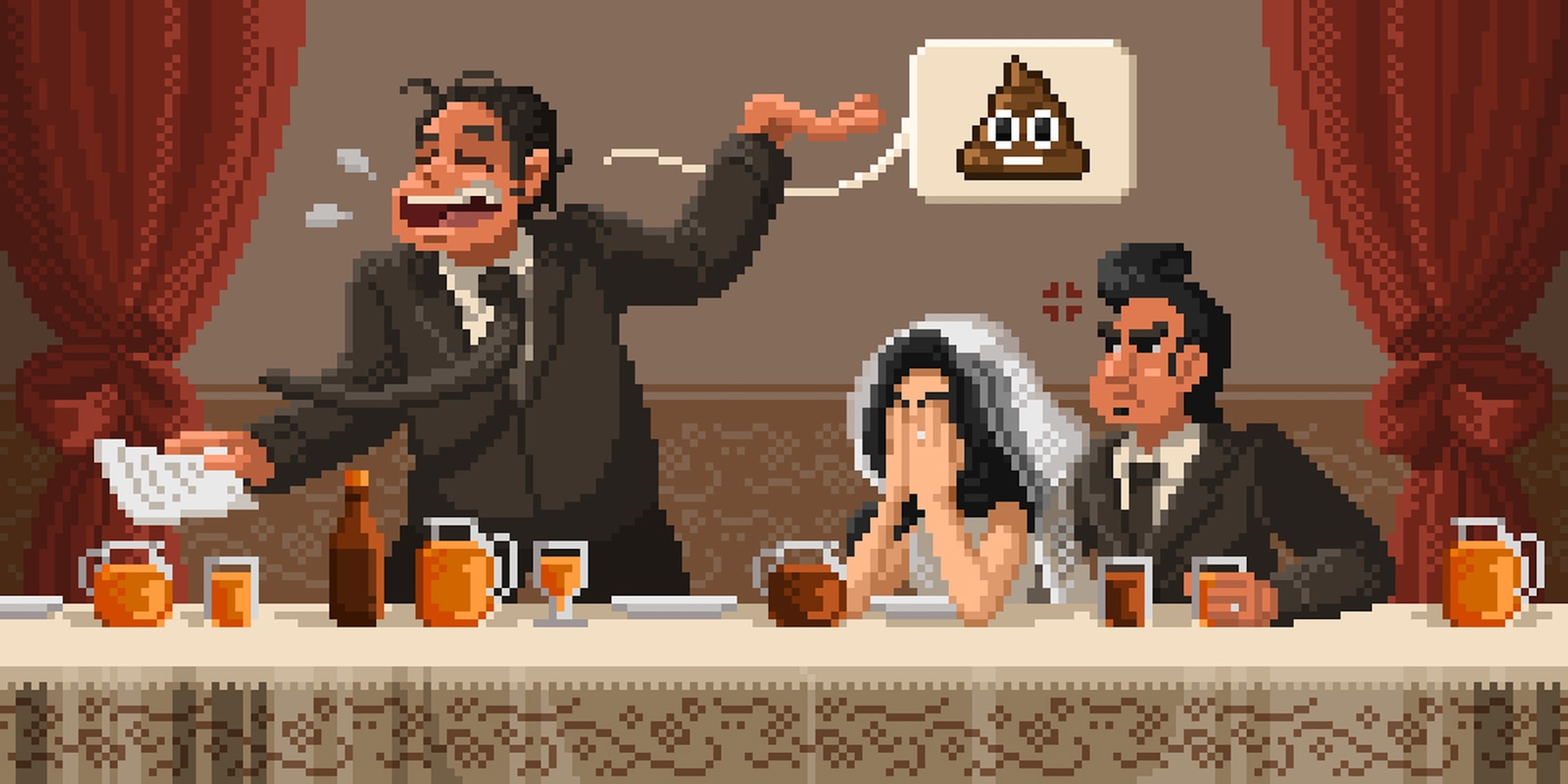 How to make your wedding speech viral-worthy

If you can't land it on your own, LaughStaff will get it done for you.

It’s that special day, and for many of us it only happens once in a lifetime. Not birth or death—it’s your wedding day! Thanks to social media, there’s even more pressure to make sure your performance is exactly what all the glossy wedding magazines and the Wedding Industrial Complex hopes it will be: The most joyful day of your life.

While there’s no shame in wanting things to go smoothly, there is shame in bombing a speech. When no one laughs, cries, or identifies with the stories or jokes in a speech given by a best man, maid of honor, or father of the bride, it can be humiliating.

In this digitally minded world, social media would have us believe that anyone can post a clear, easily followable story on Facebook (well, at least some friends can, with the help of the “edit” button)—and thus they could ostensibly do the same when writing a speech at a friend’s wedding. That’s simply not true. Not everyone is a natural storyteller, especially when it comes to telling a tale about someone who isn’t you to, at the very best, a room half-full of strangers.

Wedding-speech writing companies are nothing new, but the speeches are usually packaged as a more serious endeavor. There are other companies that write funny speeches, such as Funny Biz Writers out of Santa Monica, California, but they do not specialize in weddings specifically. For Laugh Staff, weddings are Priority Number One when it comes to laughing matters.

Womack and his crew—some of which have appeared on Comedy Central and Saturday Night Live—have built a business on making sure the most important people in a wedding can land jokes and keep people entertained. While a speech that comes straight from the heart is great, sometimes a speech can be so heartfelt that it only makes sense to the person who wrote it. In other words, you want your speech to tell a story that others can truly enjoy and remember.

“One of the things we always say is that a wedding toast is the closest thing that most people will have to doing stand-up comedy, or performing in a public speaking space,” says Womack. “People always say, ‘I can make my friends crack up,’ like when they’re with them at happy hour or during a day trip to the spa, but getting in front of that audience and doing that is a different animal.”

The tough part about making sure a joke lands at a wedding, says Womack, is speaking to a crowd that has likely known the speaker for decades. As anyone knows, approval from friends and family means far more than a laugh or head nod from a group of strangers.

“Coming from a stand-up background, I always felt a certain pressure and responsibility to deliver when those closest to me were in attendance,” says Womack. “Based on feedback from our customers, they go through a similar thought process.”

To help, Laugh Staff offers a few pointers. One of the most important things for any audience—whether it’s a wedding crowd or people at a standup show—is to win them over immediately. That way, the audience can laugh without wondering if they’re possibly a bad person for liking your comedy. If they’re on your side from the start, they will continue to laugh without hesitation because they already know that you’re great.

Also important to note: “A sincere compliment to the bride and a thank-you to the bride and groom’s parents for hosting the wedding [if they have] should be said within the first 90 seconds,” explains Womack. “Then you can transition into the humor.”

For Larry’s wedding [names have been changed to ensure privacy], his friend delivered a Laugh Staff joke that had to do with the Cleveland Cavaliers and Larry’s love for basketball. It went a little something like this:

“As most of you know, Larry is a huge Cavs fan and he lives and dies with every free throw, layup, and dunk. Larry, I know you went by ‘The Egyptian Magician’ in high school, but you remind me of Kevin Love in that you’re good-looking, expensive, and sometimes ineffective. What? It’s OK. Jen balances makes up for your deficiencies, that’s what great couples do!”

Here’s another line from a maid-of-honor speech, where she describes seeing Lauren, the bride. Apparently, this one totally killed:

“When I first met Lauren in high school, her wardrobe consisted of the tightest T-shirts possible and Wrangler jeans, exclusively. Nobody rocked a pair of Wranglers like her. Before Brett Favre and Dale Earnhardt started doing the commercials, it was Lauren’s butt that put Wranglers on the map. To this day, she could make grown men cry wearing them, no doubt. The slogan for Wrangler’s is Real. Comfortable. Jeans…which only makes sense that Joey couldn’t resist her with that Radiant. Beautiful. Ass.” 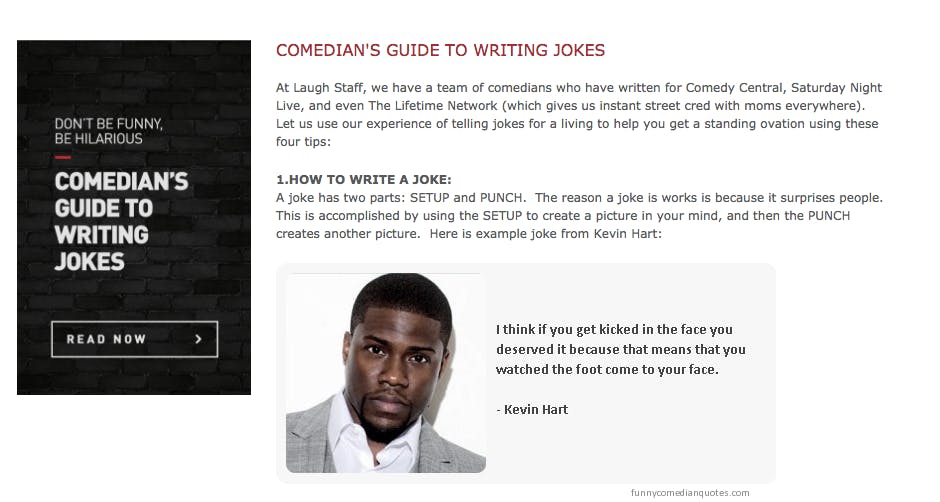 Obviously, punchlines are tailored for their intended audience, but otherwise aren’t much outside of the American-wedding-humor canon. Nothing too edgy or dark or Louis C.K.-esque, unless specified.

Though the company is based in Cleveland, the majority of Laugh Staff’s now 300-plus clients hail from Southern California or New Jersey, in areas where perhaps appearing your best holds greater value. There’s a socioeconomics and cultural acceptability to buying a $115–150 wedding speech; arguably, it’s not for everyone, even if they can afford it.

For those who do shell out that cash, there’s a certain level of performance they’re hoping to achieve. Luckily, Laugh Staff also offers coaching through Skype and via phone. The comedians who write the speeches offer suggestions on how to deliver them, especially which parts to read slower, and how to match body language with words.

“Each speech comes with suggestions on when to do air quotes, when to insert a dramatic eye roll (when necessary) or who to lock in on for certain parts of the speech,” says Womack. “One of the first suggestions we tell people is to not be afraid to hold the microphone close to their mouth. It sounds so simple, but how many times have you been at a wedding, and the minute a toast starts from a timid best man or maid of honor, someone from the back yells, ‘We can’t hear you!’”

About two years ago, Nicole Merav reached out to Womack and Laugh Staff about a wedding speech. She was in a desperate state. Her best friends’ wedding was three days away. She was the maid of honor, and she hadn’t even started brainstorming for her speech. Then she happened to see Josh Womack on the morning TV show The Talk. She reached out to him, and he responded the same day.

“I was like, ‘It’s Thursday and the wedding is on Saturday, and I need your help!’” Merav told the DailyDot.

Womack and his team helped Merav with her speech, which she said went off really well. Most of all, she said, the speech made her feel comfortable in her own skin. The comedy had very much a Beavis and Butthead slant, which her friend really loves.

“It was mostly roasting my two best friends,” she explained.

Chelsea Puin of Cleveland reached out to Womack with a similar situation. Puin is the oldest of three sisters and didn’t know what she would say when her younger sisters both got married back to back.

“We had lots of funny things that we wanted to say [at the wedding], but didn’t know how to say them,” Puin said. “We had the stories and the background and what we wanted to roast, but we didn’t want to go up there and sound really lame.”

Puin found Womack online, called him, and filled out the questionnaire that Laugh Staff gives to every client, which includes what clients do want to say, and what they don’t want included in the speech.

“I am not a comedian at all,” explains Puin. “But I wanted to make people laugh.”

After the wedding, Puin reports that some people told her that her speech was the best part of the wedding reception. Some of the lines that got people had to do with her dad, and the sacrifices he made for his three daughters.

Because we now live in a world where popularity means clicks, perhaps going viral, some clients will spend time watching YouTube speeches with headlines like “Funny maid of honor speech… Best friend’s wedding” (over 400k views) or “The Funniest Wedding Speech Ever” (597k views). Speech-givers might think this will give them a jump start on their speech writing.

In some of the funniest YouTube speeches, however, the hilarious stuff happens not when someone nails a punchline, but when they’re being so sincere that they improvise for a moment, allowing a Freudian slip to find its way into the speech. As anyone who studies improv knows, you cannot write those types of jokes—they just happen when people are being in the moment and aware.

Laugh Staff doesn’t detour clients from researching wedding toasts by watching viral videos if it helps them understand what they like. They’re also not against viral wedding speech videos, in general.

“I love viral videos, but going viral should be the icing on the cake, not the focus of your speech,” says Womack. “When the content is good, your social media fame will take care of itself.”

In other words, we could all just be $150 and a few Wrangler ass-jeans jokes away from being YouTube stars.